If you ask how Helmerich & Payne, Inc. (NYSE:HP) makes most of its money, the answer is easy: It provides drilling services for oil and natural gas companies. But that's not enough for you to understand its oil-field services industry business. There are some subtle details that are a huge deal and help explain why Helmerich & Payne's dividend has gone up annually for 44 years. Here are the little things that make a big difference.

At first blush, Helmerich & Payne's business is pretty simple to understand. It builds oil and natural gas drilling rigs and leases them out to drillers, often operating the rigs on behalf of the customer. Its rigs are located around the world, but its largest division by far is its U.S. onshore drilling fleet, accounting for roughly 90% of its rigs. 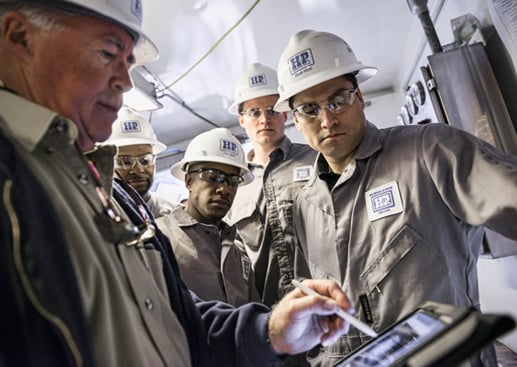 So the core of Helmerich & Payne's business is building and running drilling rigs in the onshore U.S. market. That's easy to understand, but it misses some important details that make all the difference -- details that have allowed this 4.3% yielding oil-field services company to amass a dividend record that's unmatched in the industry.

For example, Helmerich & Payne has a conservative financial foundation, with debt making up just 10% of its capital structure. The closest direct competitor, Patterson-UTI Energy, Inc. (NASDAQ:PTEN), chimes in at more than twice that level, while more diversified Nabors Industries Ltd. (NYSE:NBR) is at the high end, with debt accounting for more than 50% of the capital structure. Every company has to decide how much debt is appropriate for itself, but clearly Helmerich & Payne is positioning itself to survive even the worst downturns -- while still being able to pay investors well for sticking around.

It also works hard to stay at the cutting edge of the industry, with more of the most in-demand AC drive rigs than its competitors can claim. These rigs are more flexible and efficient than older drilling rig options. They're also the rigs most likely to be put back to work first after a downturn like the one we've just seen. 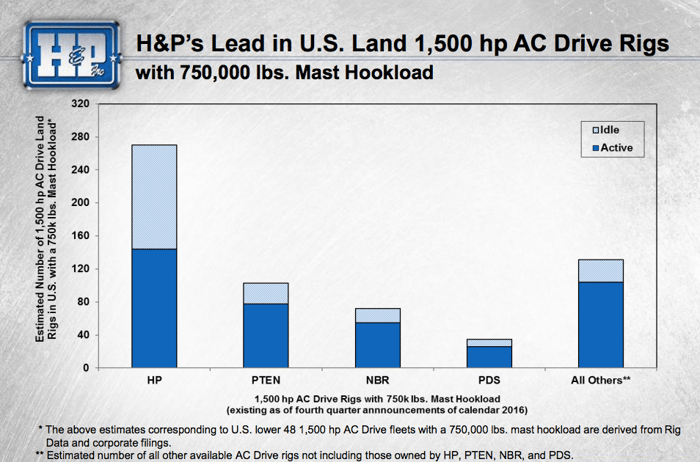 Turnarounds can happen quickly, too. Helmerich & Payne's U.S. fleet utilization hit a bottom in the fiscal third quarter of 2016, at just 87 active rigs. It's nearly doubled since that point, hitting an expected 168 active rigs for the fiscal second quarter. With a debt-light balance sheet, Helmerich & Payne can wait out downturns. Add in the focus on industry-leading technology, and it's also positioned for swift increases in demand when the next upturn comes. Those are important nuances to keep in mind.

An appreciation for depreciation

There's one more fact to understand, and that's depreciation. The rigs Helmerich & Payne builds are expensive, long-lived assets, so the company's depreciation expense can be pretty large. Depreciation is a non-cash charge that reduces earnings but has no impact on cash flow. But Helmerich & Payne generally builds rigs only when it has sufficient demand lined up, so capital spending shrinks during industry downturns. 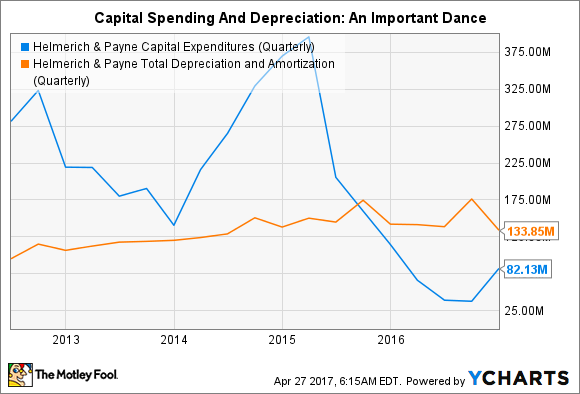 When times are good, Helmerich & Payne can spend more on building rigs than goes out in depreciation expense. But when times are bad, depreciation is often much larger than its capital spending. That protects the cash flow from which dividends are paid. This dynamic, along with a light debt load, has allowed the company to support its dividend in a way that others haven't been able to do.

Head of the U.S. pack

Helmerich & Payne's most important business by far is its onshore U.S. oil drilling segment. It builds and operates drilling equipment for customers large and small in what is a highly cyclical industry. It's positioned itself well, however, by focusing on industry-leading rigs and keeping a solid financial foundation. Both have allowed it to prosper and to reward investors with a large and regularly increased dividend. A key part of that, however, is the interplay between depreciation and capital spending. If all you saw in Helmerich & Payne was an oil-field services company, you'd be missing important facts that differentiate it from its competitors.