The mass customization company is little changed after its latest quarter as it continues to implement its long-term plans.

Keeping in mind that the Vistaprint parent doesn't provide specific revenue or earnings guidance, shares initially declined as much as 6% on the news only to all but recoup those early losses over the next few days. Now that the dust has settled, let's grab a flyer and have a closer look at what drove Cimpress' business over the past few months. 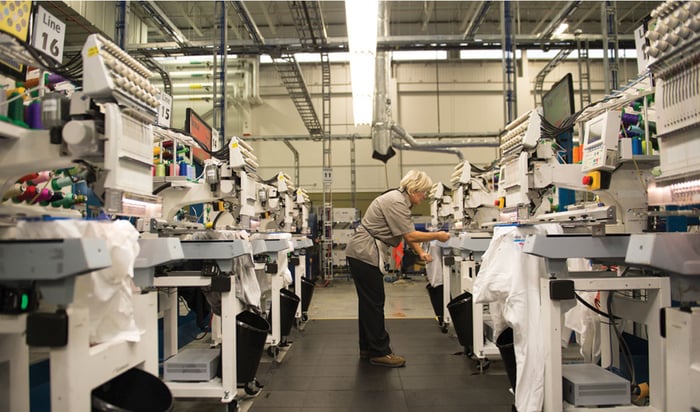 We continue to execute across a broad spectrum of initiatives as outlined at our August 2016 investor day, including activating additional components of our mass customization platform. Additionally, this was our first full quarter of ownership of National Pen, and our integration efforts to achieve targeted synergies are underway. As previously announced, we also deeply decentralized our operations over the past quarter. We believe this will improve accountability for customer satisfaction and capital returns, simplify decision-making, improve the speed of execution, further develop our cadre of general managers, and preserve and release entrepreneurial energy.

Cimpress CFO Sean Quinn elaborated that this accelerated revenue growth was in line with Cimpress' expectations, despite continued headwinds from the loss of certain partner revenue and the aforementioned shipping price reductions at Vistaprint.

Cimpress once again declined to offer specific financial guidance, but did recognize that its "financial results are 'noisy' due to many moving parts and unusual items." In the meantime, Cimpress insists it will continue to allocate capital in order to solidify its mass customization market leadership and drive shareholder value.

With that in mind, I suppose it shouldn't be terribly surprising to see shares of Cimpress trading down slightly from where they stood a year ago. The market hates uncertainty, and Cimpress stock is likely to remain under pressure until it demonstrates more tangible evidence that its efforts are yielding fruit. When that happens and these noisy results finally abate, however, I suspect Cimpress will have emerged a more stable, solidly profitable business for it.

Why Cimpress Stock Was Falling Today