Please ensure Javascript is enabled for purposes of website accessibility
Log In Help Join The Motley Fool
Free Article Join Over 1 Million Premium Members And Get More In-Depth Stock Guidance and Research
By Jason Hall – May 5, 2017 at 5:02PM

It's more important to understand how the sale of the company's renewable natural gas production facilities to BP changes it, and what to expect going forward.

Leading natural-gas-for-transportation provider Clean Energy Fuels Corp (CLNE 1.28%) reported its first-quarter results on May 4, delivering a $61 million quarterly profit, which was by far the biggest in the company's history. However, the big driver behind that profit was a deal to sell off the company's renewable natural-gas-production facilities to BP, and not the result of the company's fuel-selling or station-construction operations.

That's not to say the company's operating results were bad, but it offers important context investors need. Let's take a closer look at Clean Energy's results in the first quarter, and what to expect from the company going forward. Instead of just knowing the top- and bottom-line results, it's more important to get a whole picture of Clean Energy's operations and balance sheet. After all, that's what will matter going forward. 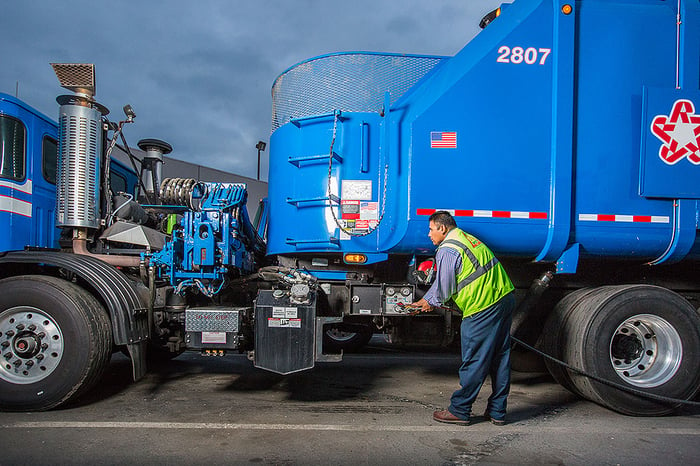 Clean Energy Fuels continues to see strong -- and growing -- demand. Total fuel volumes were up 10%, to 85.1 million gallons in the quarter, with the biggest growth coming from solid waste, trucking, and transit customers. Those operators with regular routes and "return to base" operations, in particular, continue to benefit from lower-cost, reduced-emissions compressed natural gas. The company said its CNG deliveries increased 12% in the quarter.

Total revenues were $89.5 million, down 6.6% from last year. The main reason revenue declined was the expiration of VETC, a tax credit that expired at the end of the year, but which management is optimistic will either be part of a bigger tax reform bill, or be reinstated at year-end and made retroactive, failing tax reform in 2017.

Fuel-related revenues were up 9%, while compressor and station construction sales were both down in the quarter. Management said that compressor equipment sales have stabilized, and were up 32% sequentially, while station construction activity was solid, and mostly mix related. More projects in the quarter were station expansions versus new stations.

All in all, Clean Energy continued to generate positive cash results, with $1.4 million in cash from operations, and adjusted earnings before interest, taxes, depreciation, and amortization (EBITDA) of $6.9 million without the gains from the BP transaction.

Clean Energy's decision to sell off its RNG production facilities has been both derided and lauded. On one hand, the company netted a $100 million cash gain on the sale, a move that will helped bolster its balance sheet and position the company to pay down a debt load that's already been slashed in half over the past two years. It will also reduce capital and operating expenses, further bolstering the company's margin of safety and freeing up cash to allocate to other areas. The company also still has full access to the RNG produced at these facilities, having entered into a long-term agreement with BP to sell the fuel in exchange for royalties.

The bad news is that the company traded the benefit of an improved balance sheet and lower costs for a reduction in profits. Over the past year, the growth in profitable volumes of Redeem, Clean Energy's brand name for RNG, has led to a strong improvement in per-gallon margins, which were $0.32 per gallon in the first quarter. Management said that going forward, that number will fall to $0.25-$0.29 per gallon. And that means Clean Energy's fuel-related revenues and profits will take a hit going forward.

In other words, there's some balance to this move, and management erred on the side of a stronger balance sheet and more operating flexibility, while locking up the RNG produced from these facilities.

Furthermore, CEO Andrew Littlefair pointed out that sales of Redeem are still accelerating quickly. After growing those volumes 25% last year, to 60 millions gallons, management expects those volumes to grow another 25% in 2017, meaning volume gains will help offset thinner margins.

On the earnings call, Littlefair said that, even in the current oil-price environment, he expects to continue growing fuel volumes close to 10% per year, with the expectation that higher diesel prices would accelerate that growth rate.

He also pointed out that the launch of the ISX12 N natural gas engine, built by a joint venture of Cummins and Westport Fuel Systems, could also be a big catalyst. This engine, which produces near-zero NOx emissions -- touted as being even cleaner than electric when fueled with Clean Energy's Redeem -- is set to launch within a year, and could accelerate adoption for trucking fleets looking to cut their carbon footprints. A recent deal with Republic Services to expand the use of Redeem to 28 facilities in 18 states is one example of how this is already happening with the smaller Cummins-Westport 9 liter near-zero engine.

Clean Energy may have given up some margin because of its recent asset sale, which we will surely see in coming quarterly results. But combined with a bevy of other cost-improvement moves, the company is set to spend millions less on interest and operating expenses and capital expenditures, while still funding expansion. Furthermore, the $150 million in cash the company received from BP will give management the flexibility to continue investing in growth, and to further pay off debt without needing to sell more stock and further dilute shareholders.

Will this finally be the year the company starts delivering the kind of per-share returns investors have been waiting for? Time will tell, but management has made a lot of moves that could finally start to deliver.