Think your dividends are safe in these telco giants? A new bidding war shows they may be more in a more precarious situation than you might think.

The recent past has not been very kind to Verizon (VZ -0.77%) and AT&T (T -2.22%) from a wireless subscriber perspective. Verizon just reported it lost over 300,000 wireless subscribers this quarter, despite unveiling an unlimited data plan . In the fourth quarter, AT&T lost 256,000 post-paid subscribers. Both giants are suffering from intense competition from lower-priced operators T-Mobile (NASDAQ: TMUS) and Sprint (NYSE: S) whose networks are now of similar quality.

The companies are trying to cope in different ways. AT&T is making aggressive acquisitions in media content and Latin America, while Verizon is making more bite-sized acquisitions in digital content, but mostly investing in its core network.

One imperative both companies are emphasizing is becoming a leader in 5G, the next generation network. If the two incumbents can be first-movers, perhaps they can distance themselves from T-mobile and Sprint going forward. That could be why both are now bidding for a little-known company called Straight Path Communications (NYSEMKT: STRP). 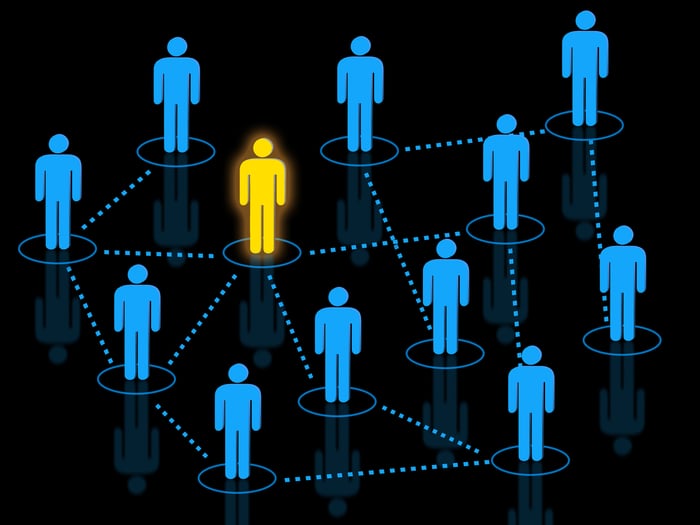 Straight Path is an entity spun out from IDT Corporation in 2013 , primarily to hold wireless spectrum assets in the 28 through 39 GHZ bands across the US. . These assets were thought to be of questionable future value back then. In fact, in 2015, research-activist hedge fund Kerrisdale Capital took a short position in the stock.

Things changed in November of last year when the FCC authorized the use of these bands for next-generation mobile wireless use, or 5G .

Thus, the 5G architecture will likely be quite complicated, and therefore, harder for others to imitate. This is why the two large incumbents, AT&T and Verizon, are eager to move first and build out these networks.

AT&T made a bid for Straight Path on April 10 for $1.6 billion, a whopping 204% premium to Straight Path's previous stock price.

Since then, an "unnamed third party," almost certainly Verizon, has made repeated bids, upping the potential acquisition price. Coming on the heels of its concession on offering an unlimited data plan, this could be yet another sign of desperation from Verizon. This week, Verizon CEO Lowell McAdam gave a TV interview with Corning's CEO (NYSE: GLW) on CNBC, detailing a new collaboration between the two companies in constructing the next-generation fiber network. A day later, Verizon reported pretty bad numbers in its first quarter earnings report.

Verizon and AT&T's shareholders likely own the stocks for their relative safety and robust dividends. While those dividends are likely safe for now, investors need to understand these two companies have declining wireless businesses and must also spend aggressively to make sure they aren't left behind in the race for 5G. The Straight Path bidding war is evidence of this.

In particular, Verizon's strategy seems a bit aimless, as it seems to have had a fear of missing out on these licenses after AT&T's initial bid. Investors also have to bet the investment in next-generation networks pays off. I'm not exactly sure management at these companies even know exactly what the 5G network will look like in the end, as they appear to be racing to gather assets presumed to be useful in the future.

While I'm more a fan of AT&T's diversification and integration strategy, both telcos have question marks around them.  In today's fast-moving world, investing in these telecom giants may not be as sure of a thing as it was in the past.

Where Will Verizon Communications Stock Be in 1 Year?
420%