In a battle of stocks on the ropes, one comes out clearly ahead.

Coming out of the Great Recession, Chipotle (CMG 0.47%) was an investment phenomenon. The company somehow found the magical combination of expanding its number of stores while simultaneously achieving rapid growth at its existing locations.

And then the bottom fell out. On the heels of multiple reports of food-borne illnesses, traffic dried up at stores. The stock cratered, and fortunes were lost. 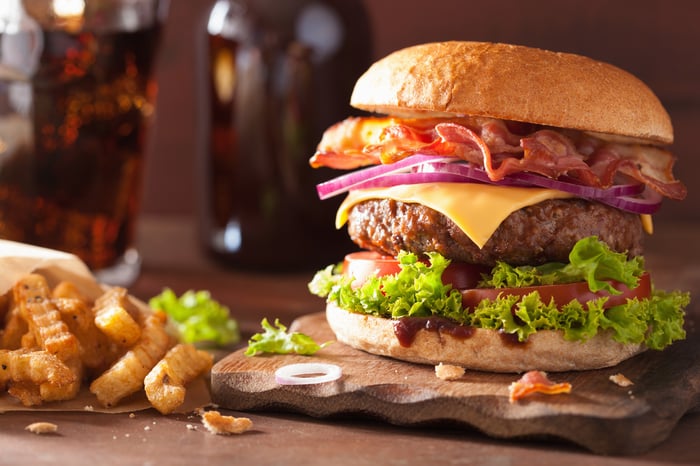 Does that mean Shack Shake (SHAK 0.12%), Chipotle's competition in today's battle, is a better buy right now? While that's an impossible question to answer with 100% certainty, we'll investigate three different ways to approach the problem, and see who comes out ahead.

If I could go back and start all over again, I'd spend almost all of my time focusing on the sustainable competitive advantages -- or the "moat" -- of my investments. When I was starting out, I was a sucker for "story stocks."

Stories are seductive, but when they attempt to predict the future -- and we have no control over actually manifesting the story -- they are fragile. The smallest hiccup can cause everything to fall apart.

That's why investigating a company's moat is so important. In the simplest sense, this is what makes a company unique, and keeps customers coming back for more while holding the competition at bay.

The restaurant industry is infamous for its narrow moats. A company's brand name and its scale are the only real moats. On the latter front, Chipotle clearly has a huge advantage over Shack Shake, with almost 2,300 locations worldwide versus the Shack's 127 eateries.

But when we investigate brands, it gets much more complicated. One thing I like to focus on for the power of brands is same-store sales, which measures how well a company increases traffic at its existing locations. Most restaurants would be happy with results outpacing inflation, but the results from these two are all over the map. 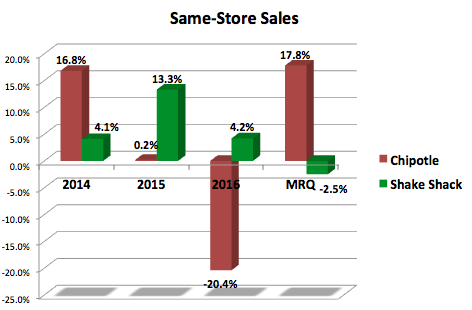 Chipotle had a rock-solid brand three years ago, helped by its focus on "Food with Integrity", and a simple menu that helped traffic flow through the door.

That brand obviously became tarnished due to the food-borne illness scandal. But it's starting to show signs of a recovery, as the company was rated the #1 Mexican restaurant domestically this year.

Shake Shack, on the other hand, might be well known in the urban centers where it's established. But if efforts at expansion are to be successful, that brand needs to gain more strength nationwide.

In the end, I don't think the moats at either of these companies are particularly strong, but I'm giving the edge to Chipotle based upon the company's scale.

Chipotle is a poster-child for the importance of financial fortitude. Had the company met the food-borne illness debacle with lots of debt and little cash on hand, it would have faced a severe crisis. But because that wasn't the case, it has survived.

That's because cash gives you options when you are in an economic crisis: you can survive, buy back shares on the cheap, make acquisitions of other distressed companies, and outspend your rivals to gain market share. Debt-heavy companies are in the opposite boat, and often at the whim of debtors.

Keeping in mind that Shake Shack is valued at just one-tenth the size of Chipotle, here's how the two stack up.

The most important thing here is that neither company has any debt to speak of. Relative to size, Shake Shack has more cash on hand and net income over the past twelve months -- but both by relatively slim margins. Chipotle has much stronger free cash flow.

I'm calling this a draw.

You'd be hard-pressed to find two restaurants that are valued as expensively as these two. But there are reasonable explanations for this. Shake Shack is small, and barely free cash flow positive, which creates an enormously high ratio. Chipotle's income statement suffered mightily from the food-borne illness crisis, but it is recovering now.

The differentiator -- in my mind -- is that growth seems much more prevalent at Chipotle than Shake Shack, as evidenced by the company's PEG Ratio.

So there you have it: Chipotle wins out thanks to its scale and superior growth prospects. But I'm not a fan of either stock, as I believe them to both be narrow-moat organizations with very expensive stocks.