Please ensure Javascript is enabled for purposes of website accessibility
Log In Help Join The Motley Fool
Free Article Join Over 1 Million Premium Members And Get More In-Depth Stock Guidance and Research
By Jordan Wathen - May 11, 2017 at 12:37PM

The company disclosed an estimated liquidation value of $9.25 in its first-quarter earnings report.

Shares of New York REIT (NYRT) are down about 11% as of 11:30 a.m. EDT on Thursday after the company reported first-quarter earnings complete with an estimated liquidation value for its shares.

The real estate investment trust is currently in the process of liquidating its portfolio of commercial real estate in New York City. In its first-quarter 2017 earnings report, it said that its assets would result in liquidating distributions of $9.25 per share. 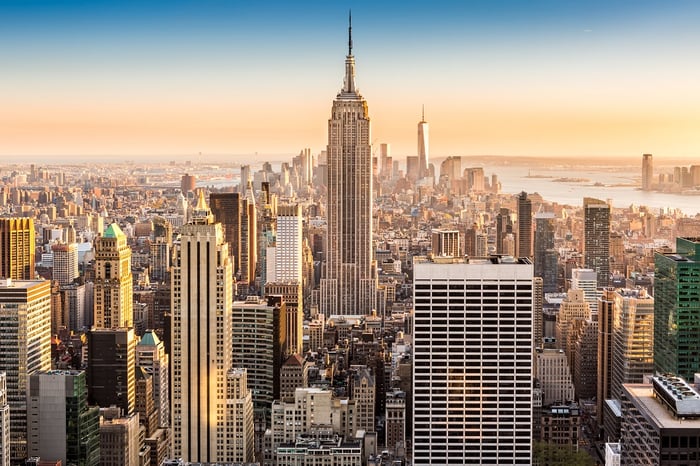 Its estimate included assets and liabilities, as well as future revenue and expenses incurred through liquidation. The actual value of its assets and future profits can't be determined with any certainty, nor is it known how long it will take to liquidate the company's portfolio.

The company reported having roughly $2.8 billion in assets against $1.2 billion in total liabilities at the end of the first quarter. Any difference between what New York REIT believes its assets to be worth and what it actually realizes in a sale will be magnified by its liabilities.

The decline in the share price values New York REIT at a modest 6.5% discount to its estimated liquidation value per share. Even after today's drop, investors will need a rather quick liquidation, or a liquidation that values its assets higher than it currently expects, in order to generate a meaningful return on their investment.