Income investors are always on the lookout for big distributions, which is understandable. But you'll also want to make sure that the investments you own can keep paying you well for sticking around. Here's why Enterprise Products Partners L.P. (NYSE:EPD) and Holly Energy Partners, L.P. (NYSE:HEP) should both be on your short list.

1. Slow and steady wins the race

Enterprise Products Partners offers a distribution yield of 6.1%. The disbursement has been increased for 20 consecutive years and counting. And within that 20-year streak is another streak: 51 consecutive quarters of hikes. There's little doubt that Enterprise pays you -- and well -- to own it. 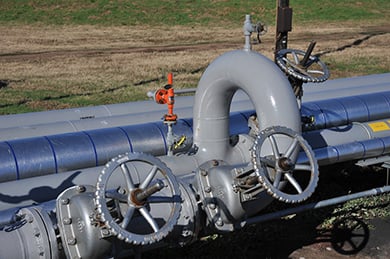 It can do that, despite being in the energy business, because it is a toll taker. Its massive collection of pipelines, storage facilities, processing plants, and even ships are largely pay-for-use assets. The market prices for oil and gas aren't all that important to Enterprise Products Partners, but rather the demand for the fuels and the end products that get created from them. Case in point: Since oil prices dropped in late 2014, demand for Enterprise's assets hasn't skipped a beat.

In fact, the midstream giant covered its distribution by 1.2 times last year. That gives it plenty of room to keep increasing the payout. But it's also got around $7 billion worth of expansion projects set to come online through 2019. As those start producing income, Enterprise will have even more cash to send to unitholders. Don't expect distribution growth of more than around 5%, but that beats inflation (and it's hard to complain about quarterly pay raises). Slow and steady is the name of the game here, but it's a game you could easily grow to love.

2. Locked in, but levered up

Holly Energy Partners is another midstream limited partnership. But Holly Energy offers unitholders a yield of 7.1%, which is one percentage point more than Enterprise. That's nice, however it's a smaller partnership and there are some other reasons for the higher yield. For example, Holly Energy is controlled by independent refiner HollyFrontier (NYSE:HFC), so there's incentive distributions in play that increase costs. Those don't exist at Enterprise, which bought its general partner years ago. Holly Energy is also more heavily leveraged, with debt at around 70% of the capital structure.  Enterprise's long-term debt is around half of its capital structure. 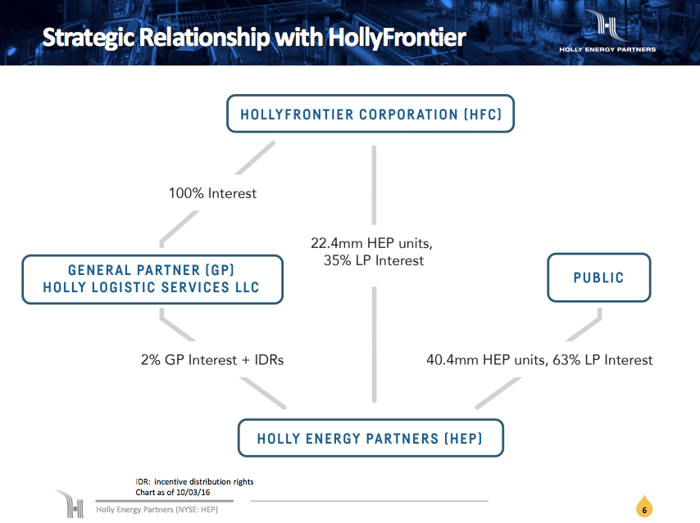 That said, like Enterprise, Holly Energy owns midstream assets that aren't all that impacted by energy prices. In fact, revenue is 100% fee-based and 80% of the top line is supported by long-term contracts. That should allow Holly Energy the financial wherewithal to handle its debt load while digesting recent acquisitions.

And it's a good bet that HollyFrontier will continue, over time, to sell assets to Holly Energy (known as dropdowns) to fuel the partnership's long-term growth. It's a win-win situation, allowing Holly Energy to grow and HollyFrontier to monetize assets without giving up control of them or all of their financial benefits. Holly Energy also plans to buy assets from non-affiliated entities.

Distributions, meanwhile, have grown every quarter since the partnership went public. The streak is up to 50 quarters -- on par with Enterprise. Distribution growth should come in around the same mid-single-digit level, too, with a target coverage of between 1.1 and 1.2 times. So the trade-off here is just a little more risk for a higher distribution yield. 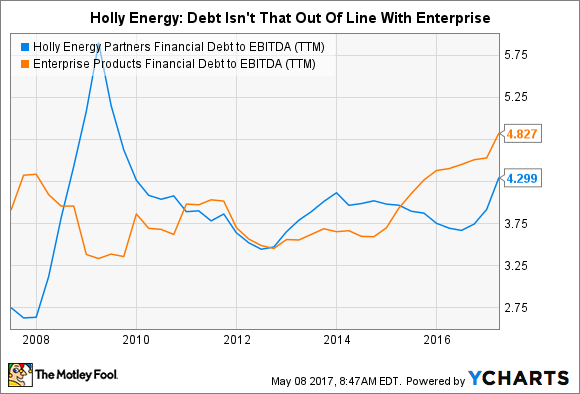 Enterprise and Holly Energy both pay out big distributions and have impressive histories of regular quarterly increases. If you are looking for investments that pay you to own them, this pair of high-yielding midstream partnerships should be on your watch list.

That said, there's a risk difference here that leads to a roughly one percentage point yield advantage for Holly Energy. It's smaller and has more debt on the balance sheet than Enterprise. Both, however, are solid partnerships with great outlooks for slow and regular distribution growth driven by acquisitions and/or new projects.