Business development companies are a peculiar type of high-yield stock. They operate under special rules, which require they pay out 90% of their earnings to shareholders, thus resulting in dividend yields that can rise as high as 14%.

BDCs frequently invest in illiquid securities -- think debt and equity in small, private American businesses -- which are inherently difficult to value. BDCs' boards of directors have the unique task on signing off on what a BDC's portfolio is worth.

When Ares Capital Corporation (NASDAQ:ARCC) recently reported that it had a book value of $16.50 per share, for example, its board had to sign off on that declaration.

When FS Investment Corp. (NYSE: FSIC) decides on a dividend policy, its board plays a role in that decision, too. And the board of directors is also supposed to hire and fire management to protect the interests of shareholders, but it is almost unheard of for a board to advocate for shareholders, even as a number of BDCs have slashed their payouts to shareholders by 50% or more.

A majority of directors are supposed to be independent of the company and its management team. In reality, most boards are stuffed with people who are friendly with management, and won't ever go against its interests.

Notably, in every case I could find, BDCs' independent board members earn more in fees serving as a director than they do from dividends earned on the shares they own of the BDC. Therefore, it is in their interest to keep their board seat above all else, even if it means giving the rubber stamp to any management proposal.

In some cases, the differential is extreme. Medley Capital Corporation's independent board members will earn more than 94 times more in director fees than they will earn in dividends from the Medley Capital stock they collectively own. Not surprisingly, there have been few truly shareholder-friendly changes at Medley Capital despite its extraordinarily poor performance for three years running.

Data source: Proxy filings. Ratios were calculated based on share ownership and compensation data in the most recent proxy statements for each company. Run-rate dividends were used for determining dividend income.

In other cases, the differential isn't so massive. Independent directors of Main Street Capital and Hercules Capital will make only about two times more from director's fees and compensation than they earn in dividends on the shares they own.

As internally managed BDCs, Main Street and Hercules Capital can pay their directors in cash and stock, which partially explains their boards' higher-than-average share ownership. But even higher-than-average stock holdings didn't stop Hercules' board from initially approving a proposal that would have transferred millions of dollars in wealth from shareholders to management. 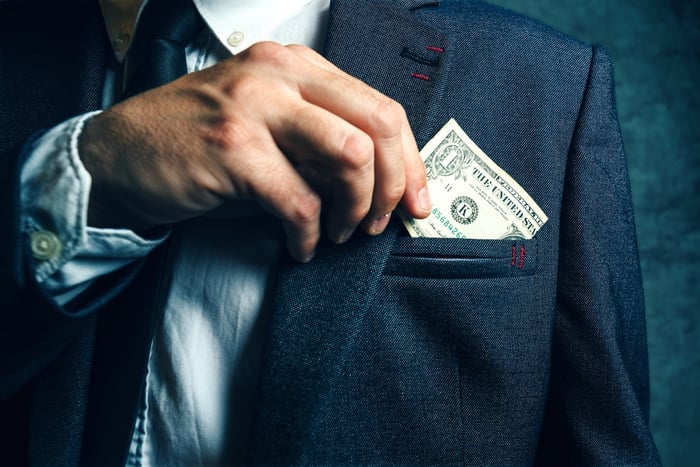 A new take on "disinterested" director

When analysts asked hard questions about the fees FS Investment pays to its managers on its latest conference call, did the board member even take notice? Should FS Investment cut its dividend, will his compensation ($116,500 last year) be similarly cut? Don't bank on it.

Independent directors play a vital role in choosing the managers for a BDC's portfolio, signing off on the valuation of the BDC's assets each quarter, and, at least theoretically, making decisions on behalf of shareholders. But unless a BDC's board has substantial ownership, why should they ever act in the best interests of shareholders?

The truth is that they won't.

In an interview, Phil Goldstein of Bulldog Investors brought up this very issue. "[I]n addition to having good paper credentials, I think it would... and I don't really know how this works, but I think it would be helpful if the board has significant skin in the game. Meaning, every director should have a significant investment in that BDC," the famed activist investor said.

He should know. He's made a living taking on closed-end funds that have proven to be poor performers for shareholders, and he knows full well that companies with invested board members have every reason to improve shareholder returns.

Last year, I noted that there was one commonality among the underperforming BDCs that have drawn an activist investor: They all have shareholders who voted against one management-friendly proposal in recent years.

If only these BDCs also had board members with a real financial interest in the companies' stock, perhaps shareholders would be protected without needing an outside activist at all.