We're now just 10 days away from the grand opening of Pandora -- The World of Avatar at Disney's (NYSE:DIS) Animal Kingdom in Florida. The theme park's expansion will be a game-changing experience, ending the common complaint that it's a "half-day park" once and for all.

The new Avatar-themed area is a gamble that Disney doesn't typically make. It doesn't own James Cameron's eco-friendly sci-fi franchise, and it's at the mercy of Cameron and a rival studio to crank out promised sequels that have been delayed several times over the years. However, most of the initial reviews from travel journalists and theme park bloggers that have been treated to sneak peeks have been gushing over the lush, bioluminescent landscape and the two new rides. Advance previews for annual pass holders began this past weekend, and I'm slated to kick the tires myself later this week. 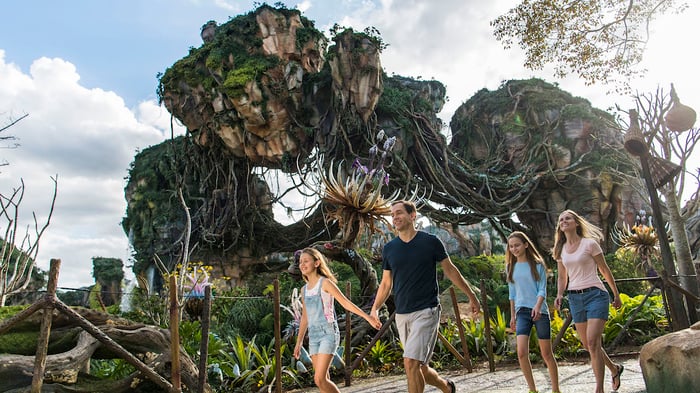 Memorial Day weekend is a busy travel period, but Central Florida will be more crowded than usual. Pandora opens on May 27, two days after Comcast (NASDAQ:CMCSA) debuts Universal Orlando's Volcano Bay. Unlike Comcast's water park that still has construction crews toiling away on finishing touches and has yet to slate any previews for its three-park passholders, Pandora is clearly ready for the onslaught of summer travelers that will descend to Florida in the coming months.

Pandora is important, and not just because it's the theme park giant's most ambitious Disney World expansion since the actual opening of Animal Kingdom in 1998. The animal-themed park has struggled to keep crowds past sunset, and last summer's push for nighttime entertainment that included an illuminated Jungle Book-themed riverfront show and street performers proved short-lived. It's going to be a different story now. Disney has a better reviewed nighttime river show in place, and the bioluminescent nature of Pandora's faux lushness will make it a popular hub after dark. The park's closing will be 11p.m. all summer long, with guests staying at a Disney resort hotel having access to the new land for an additional two hours beyond that.

Florida's summertime weather can be cruel, subjecting tourists to humidity and scorching heat with a side of afternoon thunderstorms to cool them off. Animal Kingdom's biggest flaw has been the lack of air-conditioned respite. There are a few indoor shows and attractions to soothe the experience, but there is just one fully enclosed ride at the park right now. The addition later this month of the gentle Na'vi River Journey boat ride and the thrilling Flight of Passage flying banshee simulator triples the number of indoor rides at Disney's Animal Kingdom.

Comcast is billing Volcano Bay as its third theme park, a gutsy call given the limited relative appeal of waterparks in general and the small size of the attraction itself. Disney isn't going to the same chest-thumping extreme, but it knows that there's a lot riding on Pandora. Comcast has been closing the attendance gap since the 2009 debut of The Wizarding World of Harry Potter. There was a time when this expansion was being presented as Disney's counter to its rival's Potter-themed boom, but it's clear that we'll have to wait until 2019's Star Wars Land at Disney's Hollywood Studios to scratch that itch. However, Disney's ability to fill its parks and hotels after a soft 2016 rests on the shoulders of Pandora's success. The clock is ticking, and for now it seems as if the crowds are coming.