Paycom Software (NYSE:PAYC) just turned in another fantastic quarter. The workforce management and payroll software provider has made a habit of setting high expectations, then exceeding them, and its first-quarter results were simply more of the same. Here's a rundown of three key areas where the company continued to outperform.

Paycom's top-line growth continued at a sizzling rate in the first quarter, increasing 33% to $119.5 million -- Paycom's first-ever $100 million quarter. This was especially noteworthy given that last year, first-quarter revenue grew a whopping 63% from a surge of new clients seeking to ensure compliance with the Affordable Care Act. Even on top of that boosted base, the company managed to come in comfortably above its own long-term target of 30% annual revenue growth.

As far as expectations go, Paycom handily beat the average analyst estimate for revenue of $115.8 million. Even better, the company also exceeded the high end of its own guidance by $3 million.

These strong results prompted the company to raise its full-year 2017 revenue guidance to a range of $426 million to $428 million, which represents 30% annual growth at the midpoint. While that's less than the incredible 47% top-line gain the company achieved in 2016, it's still the kind of growth that should keep investors more than satisfied.

Stronger than expected margins, too

Paycom has done an excellent job increasing its operating profitability over the past several years, growing its adjusted EBITDA margin from 16.7% in 2012 to nearly 29% in 2016. And management says it's not done yet -- with a long-term margin target of 30% to 33%.

However, in an effort to maximize its revenue growth this year, Paycom has decided to sacrifice margins a bit, by making substantial 2017 investments in its salesforce, marketing, and R&D. And though Paycom expects these bets to pay off in the form of client wins, the additional costs will naturally drive margins lower. As a result, Paycom's initial 2017 guidance called for its adjusted EBITDA margin to fall nearly 2 percentage points to 27%.

Instead, the company's first-quarter adjusted EBITDA margin actually expanded to 39%, compared to 37% last year. Though expenses will continue to increase throughout the year, the company raised its full-year adjusted EBITDA guidance to a range of $117 million to $119 million, which represents an adjusted EBITDA margin of 28% at the midpoint. That newly revised margin guidance is less than a full percentage point lower than the record margin achieved last year. If this is what a so-called "investment year" looks like, sign me up.

Winning beyond its niche

While Paycom primarily targets companies with between 50 and 2,000 employees, it has been steadily adding customers that exceed that top number over the past couple of years. This quarter was no exception, as CEO Chad Richison mentioned three new clients that each employ between 2,000 and 6,700 workers.

The beauty of new clients like these is that Paycom's licensing agreements generally include a per-employee fee, making larger clients more lucrative over the long term -- especially when you consider Paycom's industry-leading retention rates. Paycom's continued traction with bigger companies provides growing proof that its cloud-based software solution may be increasingly able to compete -- and win -- against some of its larger competitors' offerings. 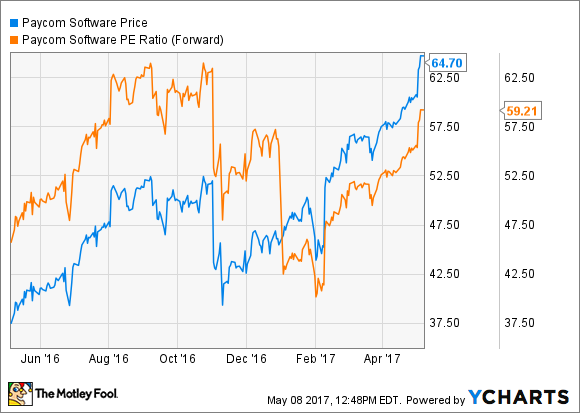 Currently trading at an all-time high, at a forward price-to-earnings ratio of nearly 60, Paycom's stock remains quite steep. Yet even with the high expectations baked into the current share price, there's very little to criticize in these results. If you're looking for a boringly consistent overachiever to add to your portfolio, Paycom is an ideal candidate -- but maybe one that ought to be bought on a pullback.