Please ensure Javascript is enabled for purposes of website accessibility
Log In Help Join The Motley Fool
Free Article
Join Nearly 1 Million Premium Members And Get More In-Depth Stock Guidance and Research
By Eric Volkman – May 22, 2017 at 7:50AM

Lowe's gets deeper into what it calls the "Pro" segment with its latest asset buy.

Lowe's (LOW -2.52%) is soon to be the owner of privately held Maintenance Supply Headquarters. The home-improvement retailer announced that it reached a deal to buy the Texas-based company for $512 million.

Maintenance Supply Headquarters distributes building supplies to apartment complexes. According to Lowe's, the company has 13 distribution centers that serve 29 geographic areas. Most of these are in the western, southeastern, and south central parts of this country.

In the press release heralding the acquisition, Lowe's said that it "is an important step in Lowe's strategy to deepen and broaden its relationship with the pro customer and better serve their needs." 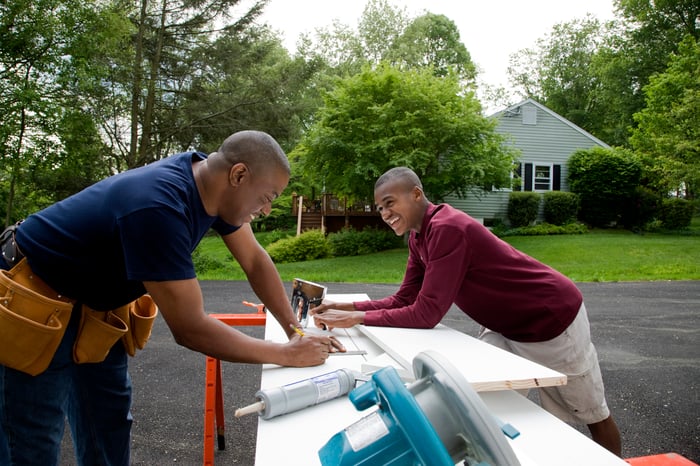 All told, the two acquisitions are set to generate around $400 million in annual sales, according to Lowe's.

The Maintenance Supply Headquarters deal is expected to close within several months. It is anticipated to be accretive to earnings for Lowe's this fiscal year.

Compared with its top rival, Home Depot (HD -2.44%), Lowe's has traditionally concentrated its efforts on the do-it-yourself home-improvement space -- individual homeowners, as opposed to the "pro" segment consisting of contractors and institutional customers. The latter clientele buys more high-value items, and Home Depot's traditional concentration on this segment is one reason its sales and margins are considerably higher.

So we can consider the purchase of Maintenance Supply Headquarters (and Central Wholesalers, while we're at it) to effectively be a way for Lowe's to buy its way deeper into the segment. That seems a more efficient way to attack it than to pivot the company's core retail operations more in that direction.

That anticipated $400 million in revenue per year won't add a big chunk to the top line at Lowe's, whose most recently reported annual figure was over $65 billion. Still, it'll make the company more competitive in an important segment and help improve margin. Like Home Depot, Lowe's has done a good job taking advantage of the current up cycle in U.S. homebuilding. It's using some of those proceeds to build up a relatively weak part of its business, a move that should support the many arguments for buying the stock.