Please ensure Javascript is enabled for purposes of website accessibility
Log In Help Join The Motley Fool
Free Article Join Over 1 Million Premium Members And Get More In-Depth Stock Guidance and Research
By Rick Munarriz – May 26, 2017 at 9:09AM

Tomorrow is going to be a big day for Disney's (DIS -0.01%) domestic theme parks. It will be opening major attractions on both coasts. Galaxy -- Mission BREAKOUT! will open at Disney's California Adventure in Anaheim, the first time that it opens a Marvel-themed ride in the U.S. market. It will also be the official debut of Pandora -- The World of Avatar at Disney's Animal Kingdom in Orlando, Disney's first new Disney World land in nearly five years.

The two Saturday openings will be the ones garnering all of the media attention -- and rightfully so -- but it's not the only new attraction debuting at a Disney park this weekend. The Music of Pixar LIVE! A Symphony of Characters will be introduced tonight in Disney World at Disney's Hollywood Studios. The show will feature a live orchestra playing the music of Pixar's popular computer-animated films. Costumed characters from Toy Story, Cars, Up, The Incredibles, and Monsters Inc. will share the stage with the symphony. 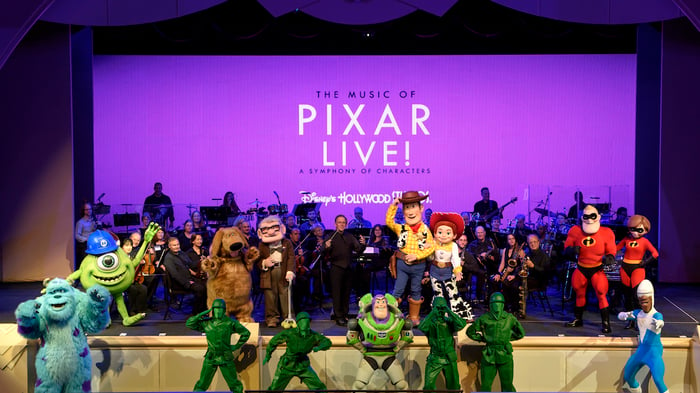 Disney's Hollywood Studios can use the boost. The park that used to be Disney World's third least visited park slipped into fourth place last year, and there are no signs that any of that will change until 2019 at the earliest.

Disney's Hollywood Studios was already losing steam before it began shutting down rides and attractions in 2014, paving the way for the eventual arrival of Star Wars Land in 2019 and Toy Story Land. Disney has yet to offer an estimated opening for Toy Story Land, but aerial shots show that construction is well underway for that expansion. Toy Story Land should open within a year of Star Wars Land's rollout.

Toy Story Land and more importantly Star Wars Land will obviously result in a spike in attendance at what is now a half-day park. With Disney's Animal Kingdom also likely to experience a big boost in turnstile clicks with this weekend's opening of Pandora -- The World of Avatar, it won't be a surprise if Disney's second most visited park -- EPCOT -- slips to last place in two to three years without a massive makeover. Thankfully for EPCOT, it seems as if it will be the target of Disney World's next major expansion project.

Today's arrival of The Music of Pixar LIVE! A Symphony of Characters is a smart short-term fix. The show will take place three times nightly for a limited time, in the same Theater of the Stars that hosts Beauty and the Beast -- Live on Stage several times earlier in the day. In other words, it utilizes existing real estate to add a new attraction in a park that's sorely lacking in space that's free of construction crews. The new show should have multigenerational appeal with the characters entertaining the kids while the orchestra dazzles the parents and grandparents. The park's return to glory is still two years away, but it's not standing still in the process.