It's now been nearly two years since Amazon.com (NASDAQ:AMZN) discontinued its misguided Fire Phone, which was a complete flop for a plethora of reasons, including the gimmicky Dynamic Perspective and Amazon's supreme tardiness to the smartphone market (which was in part caused by the time necessary to develop Dynamic Perspective), among others. As poorly as the Fire Phone fared, you'd think the e-commerce giant would throw in the towel. 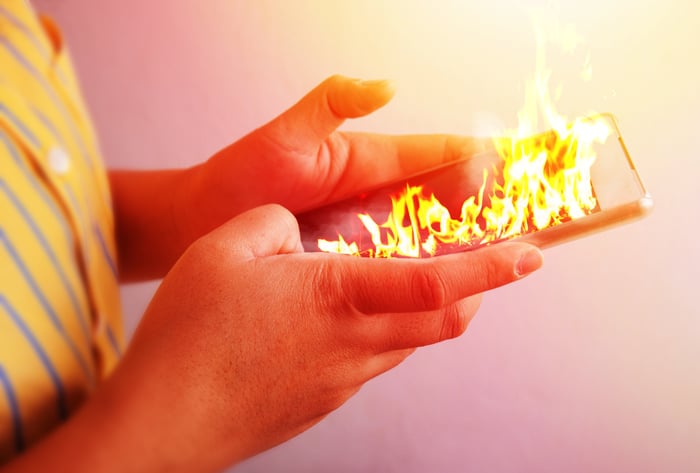 NDTV's Gadget 360 reported earlier this week that Amazon is working on a successor to Fire Phone, which is internally code-named the "Ice" Phone. This may not be the official branding, if this device ever sees the light of day.

The good news is that Amazon is reportedly taking a completely different strategic approach to the device. Fire Phone was positioned as a premium device, which was a distinct departure from the company's characteristic approach of aggressively undercutting on price when competing (like the popular Kindle Fire tablets). The premium smartphone space in developed countries was already quite mature in 2014 and 2015, dominated by Apple and Samsung. That positioning directly undermined one of Jeff Bezos' favorite mantras: Amazon doesn't try to make money when customers buy its devices, but rather when customers use its devices.

Instead, Ice is expected to target emerging markets such as India, which recently overtook the U.S. to become the second-largest smartphone market by unit volumes. The average selling price (ASP) of a smartphone in India is under $150, which represents roughly 8% of GDP per capita in the country, according to Mary Meeker's Internet Trends 2017.

Amazon may have learned another lesson with Fire Phone's failure, though. The Ice Phone will reportedly support the broader Android ecosystem and Alphabet subsidiary Google's Google Mobile Services, which notably includes the official Google Play store. The original Fire Phone did not support Google Play, but instead relied on Amazon's Appstore, which was a small subset of the broader Android ecosystem. (Fire tablets still do not officially support Google Play and only use the Amazon Appstore.)

In terms of specs, the Ice Phone will reportedly feature a display size that's somewhere between 5.2 inches and 5.5 inches, a 13-megapixel primary rear camera, 2 GB of memory, and 16 GB of storage. It will run the latest version of Android, and interestingly it might include Google Assistant but not Alexa, according to the report. Amazon could still decide to include Alexa, as Alexa has made its way into most of Amazon's hardware offerings, including other mobile devices.

A low-end Qualcomm Snapdragon 435 may power the device, and it should include a fingerprint scanner as well. The expected starting price is 6,000 rupees (approximately $93), but pricing could easily change.

This is what Amazon should have done all along

Targeting emerging markets is what Amazon should have done initially with its phone strategy. It was pretty clear even in 2014 that it wasn't really worth trying to compete in the high end, and selling lower-cost devices would help Amazon grow its user base and introduce more consumers to Amazon's core e-commerce business.

Amazon is betting big on India, and has now invested $5 billion in infrastructure. Maybe the Ice Phone can redeem Amazon.