The fashion brand tumbled after giving disappointing guidance for the current year and cutting more than 10% of its store base.

Shares of Michael Kors Holdings Limited (CPRI -0.10%) were getting tossed away last month after the fashion brand gave weak guidance in its first-quarter report and said it would close 100-125 stores.

According to data from S&P Global Market Intelligence, the stock finished the month down 11.1%. As you can see from the chart below, those losses came mainly on the release of the company's earnings report on the last day of the month. 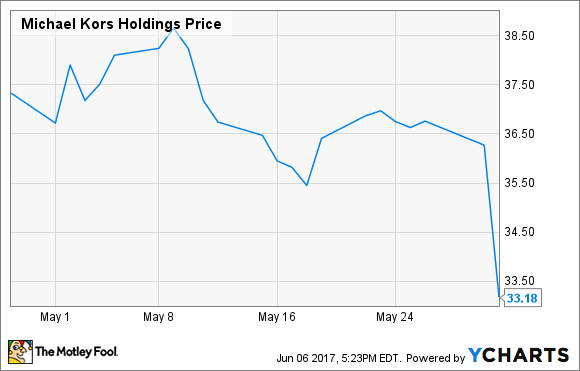 Michael Kors shares fell 8% on May 31 after it released its earnings report. The retailer of handbags, accessories, and apparel actually beat estimates in the quarter, but the stock was overwhelmed by weak guidance and the store closure news.

Like other fashion brands including Coach and Kate Spade, Michael Kors has been suffering from a combination of weak department store sales, an overstored retail environment, and potential brand fatigue.

CEO John Idol called fiscal 2017 a "challenging year," saying the "difficult retail environment" forced the company to be more promotional than it wanted to be. He also acknowledged problems with the product and store experience, and said the company would work to fix those problems in fiscal 2018, which he called a "transition year."

Management's guidance for the current year called for EPS of $3.57-$3.67, down from $4.48 last year, and for comparable sales to decline in the high-single digits, a sign that the recent troubles aren't going away anytime soon. Overall revenue is also expected to fall 6% to $4.25 billion.

The company also said it would close 100 to 125 stores over the next two years, evidence that it expanded too quickly, and it said those closures would result an annual savings of $60 million a year.

Like much of the apparel retail industry, Michael Kors profits continue to fall as mall traffic is on the decline. Management promised to turn the business around for long-term growth, but recent results have not been encouraging. While the stock looks cheap according to conventional metrics, it's too risky for my senses with sales and profits in free fall.