Please ensure Javascript is enabled for purposes of website accessibility
Free Article Join Over 1 Million Premium Members And Get More In-Depth Stock Guidance and Research
By Asit Sharma - Jun 19, 2017 at 8:30AM

Are investors beginning to acknowledge the potential for the company's new messaging platform?

LivePerson shares surged upon release of the company's first-quarter 2017 earnings report on May 10, and they continued to climb throughout the month. In fact, during the first two trading weeks of June, LivePerson's stock has barely paused on its upward trend: 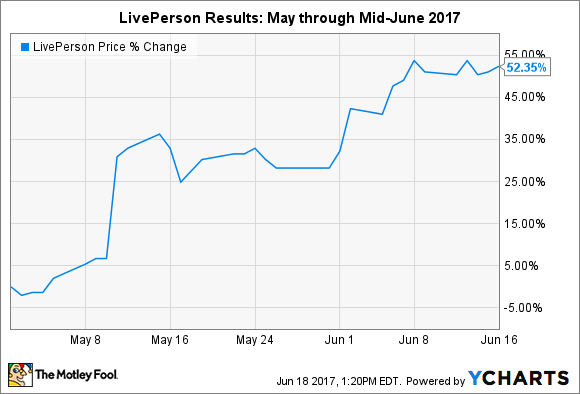 On the surface, the quarter's results, while positive, didn't warrant such a dramatic reaction. Revenue of $50.9 million was within the previously issued guidance range of $50.0 million to $51.0 million. A net loss of $5.7 million translated into an earnings-per-share loss of $0.10, which was at the low end of the company's projected loss of $0.10 to $0.12.

Alongside the earnings release, LivePerson raised the lower end of its full-year revenue guidance range from $201 million to $204 million, leaving the upper end intact at $209 million. The company attributed the revision to a solid start to the year. Management also cited the imminent completion of LivePerson's platform transition to LiveEngage, its new suite of brand-to-consumer messaging tools. 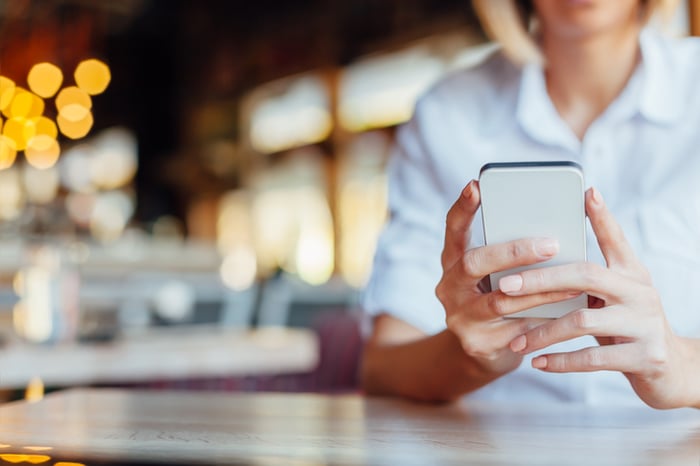 Anticipation of the prospects for LiveEngage, and a growing market for its services in general, appears to be behind the renewed enthusiasm for LivePerson shares. Recently, the company has invested heavily to maintain and extend its market-leading position in chat technology, including development of artificial-intelligence solutions and next-generation chatbot software.

Indeed, many signs point to a potential growth acceleration: LivePerson signed 74 deals during the quarter, among existing customers and 25 new ones, while holding its average revenue per enterprise customer above $200,000. Mobile usage on LiveEngage reached 35% of total interactions, far in excess of the 7% to 10% usage historically associated with the company's legacy platform.

While investors appear to be keen on LivePerson's expansion potential within a multibillion-dollar market for business-to-consumer chat interactions, it may take the balance of the year to prove the enthusiasm fully warranted. So far, aside from the revenue-outlook tweak, LivePerson's management has left all other full-year guidance unchanged, including a net loss-per-share projection of between $0.31 and $0.40. Investors should enjoy the stock surge, but stay tuned for the next two to three quarters' results, to gauge the impact LiveEngage will exert on both the company's top and bottom lines.