Disney's (NYSE:DIS) once-promising push into location-based entertainment officially dies this weekend. DisneyQuest -- the five-level video arcade at its Disney Springs shopping, dining, and entertainment complex -- will unplug its collection of video games and themed attractions for the last time on Sunday night. The NBA Experience will eventually take its place, an immersive basketball experience that makes a lot more sense now that Disney has recently partnered with the Orlando Magic to be the hardcourt team's official uniform sponsor.

The closing of DisneyQuest is bittersweet. It joins many closed cult favorites --including the richly detailed Adventurers Club speakeasy, Comedy Warehouse hub of improvisational comedy, and Mannequins nightclub with its signature rotating dance floor -- clearing the way for trendy restaurants and ritzy retailers to take their place in the rechristened Disney Springs. 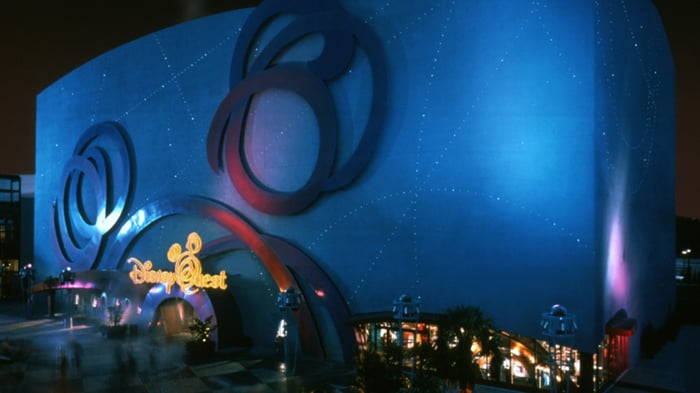 The rise and fall of a Disney arcade

DisneyQuest's closing was inevitable, but like most video games, we're getting to the "Game Over" screen after a series of bad moves. The big-box concept's inability to raise the bar in gaming tech beyond its initial rollout, crowd-thwarting pricing moves, and the neglectful maintenance of its diversions sealed its fate long before it was dunked on by the NBA.

The concept had so much potential when DisneyQuest debuted at Disney World in 1998. Guests would board an elevator that contained a pre-show starring Aladdin's Genie, unloading passengers in the middle of the action. Gamers would then be free to explore several floors of throwback games and amped-up Disneyfied attractions. Players could design their own roller coasters, going on to ride them in two-seat simulators. A Buzz Lightyear-themed bumper car attraction featured medicine ball cannons that could be fired at targets on other enclosed vehicles. Another signature experience had teams of players don 3D glasses and board a pirate ship where they would try to sink other boats to nab their gold before facing off with sea monsters and a dead pirate. Non-gamers could take part in animation clinics, learning to draw classic Disney characters. Meals and snacks were available on the top two floors.

If DisneyQuest sounds like Dave & Buster's (NASDAQ:PLAY) on mouse-eared steroids, you wouldn't be off the mark. However, as Dave & Buster's continues to thrive and expand as one of the few chains to flourish in this restaurant recession, DisneyQuest flopped.

Initial dreams of expansion ended early. A second location that opened in Chicago in 1999 closed just two years later. A third location planned for Philadelphia was nixed. The original DisneyQuest became an only child, and Disney chose to neglect it.

Few new experiences -- like a Wreck-It Ralph arcade game -- have been added over the past decade. The prize-redemption games were taken out years ago, and food quality took a step back after Cheesecake Factory (NASDAQ:CAKE) bowed out with its fast-casual Cheesecake Factory Express in 2008. It's a far cry from the strategy at Dave & Buster's where new games, trendy redemption prizes, and a perpetually updated menu keep things fresh. Disney chose to play things cheap, treating DisneyQuest like a 1998 time capsule.

Things are obviously different at Dave & Buster's and most arcades, where admission is free with "pay as you go" pricing for the actual games. DisneyQuest could've been Dave & Buster's, a one-stop shop for dining and entertainment that could've been a hipper expansion vehicle to its Disney Store empire.

DisneyQuest was ahead of its time in 1998 with virtual reality, and it could've made a killing in 2017 if it had maintained its games and raised the bar on augmented reality. Dave & Buster's stock has gone on to more than quadruple since going public at $16 three years ago. DisneyQuest will bow out as an ambassadorial juggernaut that was never given a chance to succeed.