Over the past month, I talked about Under Armour's (UA -3.75%) (UAA -3.60%) best moves, worst moves, and its biggest competitors. In a nutshell, the athletic apparel and footwear maker's troubles can be attributed to tough competition from bigger players, questionable design decisions, and shrinking margins.

Why Under Armour's gross margin matters

Under Armour's revenue rose 28% in 2015 and 22% in 2016, but analysts expect just 11% growth this year. Much of that slowdown can be attributed to the return of Adidas (ADDYY -1.05%), which has grown rapidly in UA's core North American market. During the first quarter, Adidas' North American revenue rose 36% annually (31% on a constant currency basis) while Under Armour's dipped 1%.

As revenue growth slows down, gross margins will often decline as prices are slashed to win back customers. If we compare UA and Adidas' gross margins over the past five years, that troubling trend is easy to spot. 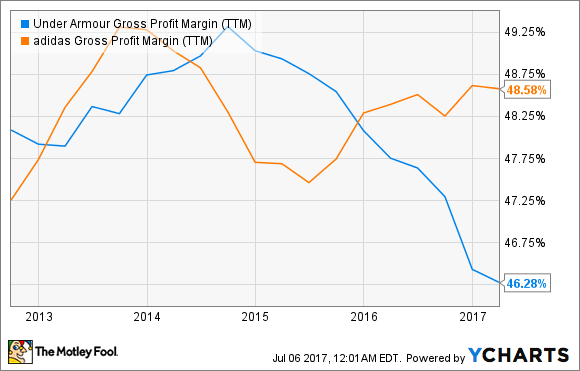 Adidas, which made a roaring comeback with premium products like Kanye West's Yeezy shoes, expanded its margins as its revenue growth accelerated. Under Armour, which struggled with waning interest in its flagship Curry shoes, saw its margins decline.

UA also pivoted away from higher-margin apparel toward lower-margin footwear, while the bankruptcy of Sports Authority last year -- which flooded the market with excess wholesale inventory -- exacerbated that pain.

But that's only half the story

Gross margin doesn't account for other big operating expenses -- like selling, marketing, development, and other costs -- which a company needs to actually sell the product. After deducting those expenses, we get the operating margin -- which looks even uglier for Under Armour.

To keep pace with bigger rivals like Adidas, Under Armour spends a lot of money on pricey endorsement deals with celebrities like The Rock and Steph Curry. It also must keep developing new shoes and apparel that will stand out in the saturated sportswear market.

In the past, UA's operating margins expanded as it charged higher prices and scaled up. But over the past five years, UA's operating expenses fell as higher selling, general, and administrative expenses (up 12% annually last quarter) outpaced its revenue growth (up just 7%).

UA attributes those rising expenses to "continued investments in the direct-to-consumer, footwear and international businesses" -- but its declining operating margins compare poorly to Adidas' improvements: 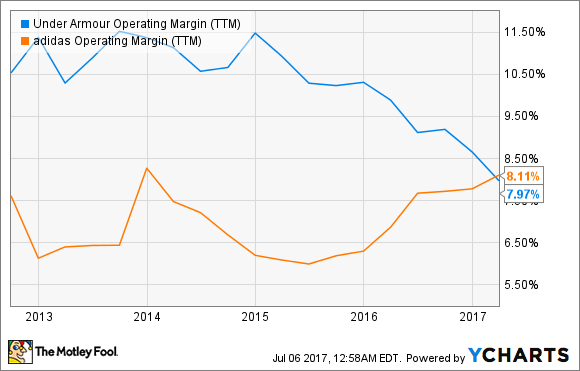 This situation won't improve anytime soon. GlobalData Retail analyst Neil Saunders stated that his firm's "outlook on (UA's) profits remains relatively gloomy" as "a push to more direct sales, including via e-commerce, will dilute margins." Saunders also noted that "more marketing will be necessary to keep the brand on the consumer radar," which could result in higher operating expenses.

Under Armour offers a mixed bag of solutions

UA's plan is to expand more aggressively in overseas markets, where it can hopefully command higher prices. Unfortunately, nearly 80% of UA's sales still comes from North America, and there's no guarantee that it can top Adidas or Nike's brand appeal in those higher-growth markets.

UA believes that the "premiumization" of its brand with high-end shoes like last year's Curry 3 and the Project Rock Delta (which both cost $140) will enable it to charge higher prices. Those results have been mixed -- the Curry 3 sold poorly, but the Rock Delta quickly sold out.

But at the same time, UA is trying to sell its excess inventory by partnering with Kohl's and DSW -- which are both known for big discounts. Big brands like Adidas and Nike can generally sell footwear across all price tiers without cheapening their premium products, but it's unclear if Under Armour has the brand strength to do the same.

Wall Street expects UA's earnings to dip 4% this year as its margins continue to decline. That forecast doesn't justify its trailing P/E of 56, which is more than double the industry average of 26 for apparel retailers. That premium strongly indicates that shares of UA could fall even further -- even after dropping more than 40% over the past 12 months.