Please ensure Javascript is enabled for purposes of website accessibility
Log In Help Join The Motley Fool
Free Article Join Over 1 Million Premium Members And Get More In-Depth Stock Guidance and Research
By Jeremy Bowman - Jul 9, 2017 at 7:20AM

The office-supply retailer has agreed to be acquired, sending the stock up at the end of June.

Shares of Staples, Inc. (SPLS) gained 11% in June, according to data from S&P Global Market Intelligence, as the office-supply retailer agreed to be acquired by Sycamore Partners, a private equity firm. 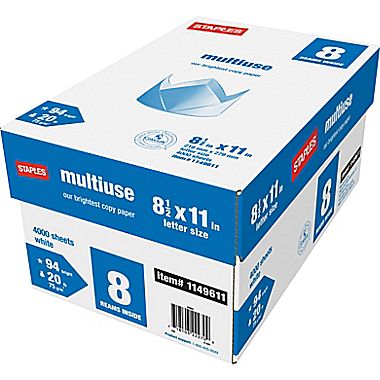 The stock surged on June 28, the day the deal was announced as the chart below shows. 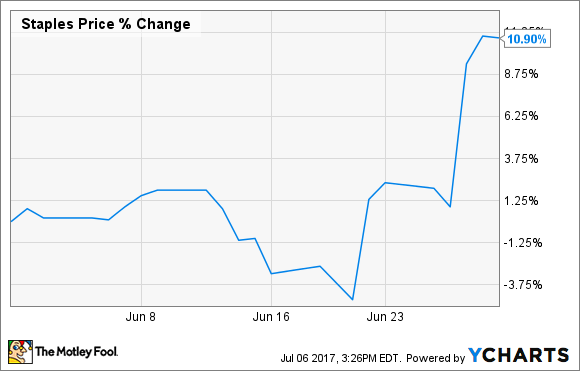 Staples agreed to sell itself to Sycamore Partners for $6.9 billion, or $10.25 a share, in an all-cash deal. Reports had spread back in April that Staples was seeking a buyer after the Federal Trade Commission blocked its proposed merger with Office Depot (ODP 3.76%).

The buyout price was approximately 20% higher than where Staples was trading before news reports first broke.

The deal comes after Staples had tried in vain to repair its flailing retail business by closing stores and attempting to merge with Office Depot. However, the company still has a prosperous commercial business, delivering directly to businesses, which drove significant profits for Staples and made it attractive to a buyer like Sycamore.

Staples' sale is the latest evidence of the troubles across the retail industry as a number of companies have declared bankruptcy or are seeking buyers. With its retail business waning, selling itself seemed like the right move as the stock was only likely to head lower as sales continued to evaporate. Staples is currently trading about 2% below the buyout price, indicating some skepticism that the deal, which is still awaiting shareholder approval, will go through. Some shareholders have said that the price is too low, including major holder Richard Pzena, CEO of Pzena Investment Management. Based on historical retail multiples, the Staples acquisition is cheap, but the price seems fair, considering that its industry is in decline.

Assuming the deal goes through, it is expected to close by the end of the year. Analysts believe Sycamore could attempt another merger with Office Depot.