As new-vehicle sales in the U.S. continue to plateau, investors are left with more questions than answers about the automotive industry's health. Toward the end of July, investors will get plenty of data to sort through from the major automakers' second-quarter results, but on Wednesday morning, the markets got a sneak peek into the automotive dealership world with Lithia Motors' (NYSE:LAD) preliminary Q2 data. The numbers were good enough to send shares 9% higher at 11 a.m. EDT today, and also pulled Lithia's peers up with it. At the same time, Group 1 Automotive was 5.7% higher, Penske Automotive was up 4.4%, and AutoNation rose more than 3%.

Lithia Motors, a retailer of new and used vehicles and related services, boasts over 30 brands and more than 150 stores in the U.S. market. In addition to revealing its preliminary results, it launched its previously announced private offering of $300 million in senior notes Wednesday.

We grew revenue and adjusted earnings per diluted share by double digits as our results exceeded our internal projections in the second quarter. Our store leaders continue to modify their tactics in this dynamic market and produced strong results in retail used vehicle sales, service and parts and F&I. The acquisition market remains active and we believe this is an opportune time to access additional capital for growth. We seek greenfield-like returns on our acquisition targets and anticipate further activity in the near future. 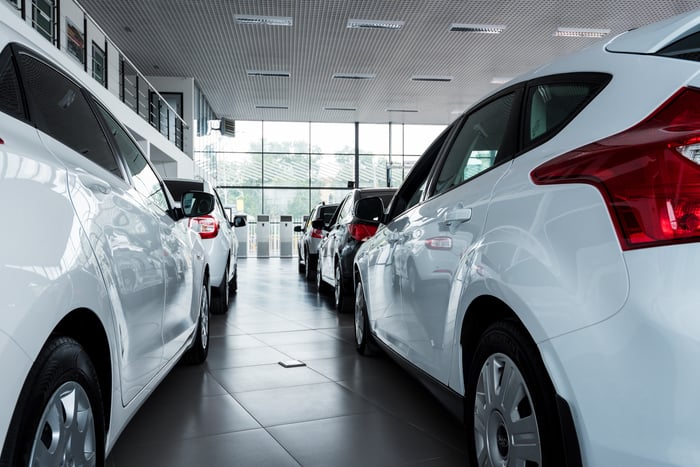 As good as it looks?

Let's set the backdrop for why Lithia Motors' comparable-store sales could be the bright spot in the Q2 data. In June, the U.S. seasonally adjusted annualized sales rate (SAAR) clocked in at 16.54 million vehicles, the slowest pace of 2017, and below estimates. It was the fourth straight month when the SAAR failed to reach 17 million, a streak that followed a six-month streak of topping that mark.

With investors expecting weaker sales across the industry, Lithia Motors' preliminary Q2 same-store sales increase of between 2.3% and 2.6% is a positive surprise. But that doesn't tell the entire story: Lithia's new-vehicle same-store unit sales declined 0.4% year over year. That decline was partially offset by a 4.6% increase in its used-vehicle units, and its total sales figure was boosted by its service, body, and parts same-store sales, which increased between 6.8% and 7.1%.

All in all, while Lithia's total same-store sales figures might not be as rosy as they appear at first glance given that factors other than strong new-vehicle sales were responsible for the gains, they amount to another sign that the ongoing sales plateau isn't crippling the U.S. auto industry just yet.

Lithia Motors Jumps 9% on Preliminary Q2 Data. Is It as Good as It Looks? @themotleyfool #stocks $LAD Next Article
Current