Few stocks have skyrocketed like Axim Biotechnologies (OTC:AXIM). Last year, Axim ranked not only as the best marijuana stock in terms of overall performance, but also took the top spot among all biotech stocks.

So far in 2017, though, Axim shareholders have experienced a roller-coaster ride, with the stock more than doubling in price early in the year before giving up most of the gains. In March, shares soared more than 65% but again dropped close to their starting level.

Is Axim Biotechnologies a stock that investors should seriously consider? Here are three things you need to know first. 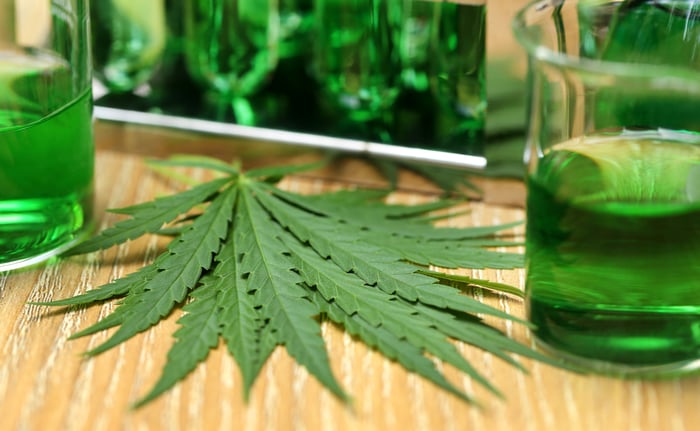 Axim hasn't always been focused on marijuana. The company was founded in 2010 as a vehicle to acquire or merge with other businesses. By the end of the following year, Axim had forged two deals -- one with Omega Research Corporation to license technology relating to the processing of organic waste into marketable byproducts and a joint venture agreement with Alpha International Marketing Corp. to convert used tires to biochar and fuel oil.

The company changed its direction in 2014, deciding that it would focus on developing cannabinoid drugs for the treatment of pain, spasticity, anxiety and other medical disorders. In May 2015, Axim made a big step in that effort with its acquisition of Can Chew, which markets chewing gum made with cannabidiol (CBD), a non-psychoactive chemical in marijuana. Can Chew was owned by a Dutch pharmaceutical company, Sanammad Foundation, and Medical Marijuana Inc. (OTC:MJNA) a top supplier of CBD oil products.

Sanammad and Medical Marijuana Inc. became the largest shareholders of Axim. The two organizations together hold over two-thirds of Axim stock. Axim CEO George Anastassov was one of the founders of both Can Chew and Sanammad, so there were already some close connections between these businesses.

Much of Axim's pipeline is centered around its CBD chewing gum products. Its most advanced clinical program is a phase 2 study of Can Chew plus chewing gum in treating irritable bowel syndrome (IBS). This study, which was sponsored by Wageningen University in The Netherlands, was scheduled to be completed by June 2017.

In addition, Axim is researching use of its CBD chewing gum in treating multiple other diseases, including pain and spasticity associated with multiple sclerosis. The multiple sclerosis early stage study is scheduled to wrap up by the fourth quarter of 2017. Axim hopes to complete a phase 2/3 clinical trial in 2018 if all goes well.

Axim's other phase 2 candidate is AX-1602. The topical cannabinoid application is being evaluated in a proof-of-concept clinical trial at the Dermatological Center Maurits Clinic in The Netherlands for treatment of psoriasis and atopic dermatitis.

There are three primary risks related to owning stock in Axim Biotechnologies. One is the company's financial position. As of the end of March, Axim had a cash stockpile of $632.4 million. However, the biotech lost over $524 million in the first quarter.

Axim doesn't have enough money to fund operations for much longer. The company intends to raise more cash through borrowing and another stock offering. Axim acknowledges, though, that there is "substantial doubt" about its ability to continue as a going concern. Even if it raises a significant amount of money through a stock offering, that would mean considerable dilution for existing shareholders.

The second risk for Axim shareholders relates to its pipeline. There's no guarantee that any of its candidates will be successful in clinical testing.

Finally, perhaps the greatest risk of all for Axim and its shareholders is the level of expectation built into its stock price. Axim's shares currently trade at over 9,200 times sales. That ridiculously high valuation implies expectations of ginormous growth in revenue and earnings for the company in the next few years. If Axim doesn't deliver (which is entirely possible), this marijuana stock runs the risk of going up in smoke.