One of these companies in the hot semiconductor industry has been on a roll, while the other has hit the skids but could be on the verge of a groundbreaking opportunity.

Investors looking to profit in the semiconductor space have certainly been in the right place recently. The sector has been on fire and has risen over 53% in the last year, as tracked by the PHLX Semiconductor Index, which follows the top stocks in the industry.

Those returns have not been evenly distributed, however. Himax Technologies, Inc. (HIMX 2.94%), whose semiconductors control everything from LCD TVs to touch sensors, has seen its price fall by 7% in the past year. During that same time, graphics processing pioneer NVIDIA Corporation (NVDA 2.48%) is up a stunning 214% because of gains in its core gaming market and advances in artificial intelligence (AI).

Returns alone shouldn't be used to judge the potential of any investment, as past performance doesn't guarantee future returns. Let's review a number of key financial metrics to determine which stock is a better place for new money right now. 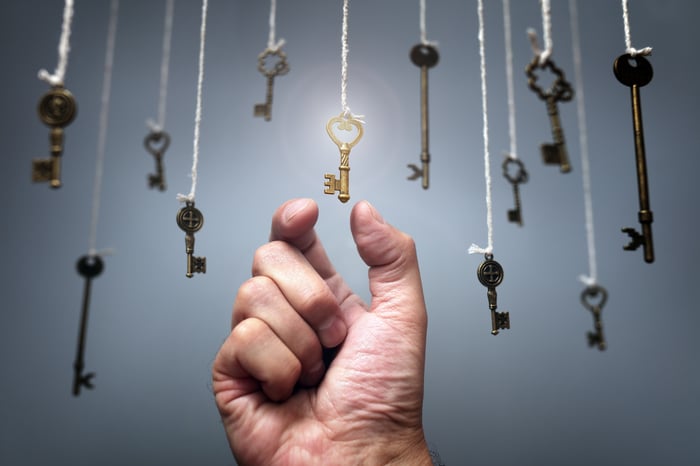 Which of these semiconductor companies is a cinch for new money? Image source: Getty Images.

Both companies have very little debt for their respective sizes and could easily eliminate that debt with available cash. NVIDIA, however, has three times the cash relative to its debt, which gives the company a stronger balance sheet and puts it on a much firmer financial footing.

In its most recent quarter, Himax saw its revenue fall to $155.2 million, a 14% decrease from the prior-year quarter, and net income that fell an astonishing 94%. Himax has been pinning its hopes on one breakout technology after another, but those haven't seemed to work out for the company. Most recently, Himax has been hitching its wagon to virtual reality and 3D, and rumors suggest it could supply 3D sensing chips in the upcoming iPhone, but there has been no confirmation and investors will have to see how that plays out.

Revenue from Himax's core products weren't faring well, either. Sales of drivers for large-panel displays were off 10% year over year on weakness in its Chinese market and an earthquake in Taiwan. Revenue from drivers for cell phones and tablets didn't do any better, down 16% from the prior-year quarter, again caused by disappointing results in China. The loss of a major customer from discontinuing production added insult to injury.

During the same quarter, NVIDIA revenue hit $1.94 billion, a 48% year-over-year increase, while net income rose 144% over the prior-year quarter to $507 million. The company saw impressive increases in its core gaming market, up 49% year over year, but also saw breakout results in its data-center revenue of 186%, because of increased demand for its graphics processors for the training of platforms using AI.

NVIDIA has been aggressively pursuing business in the field, as the massive parallel processing ability needed to render graphics is also ideal for training AI systems. NVIDIA has exploited its early lead by creating platforms that combine processors with the algorithms necessary to train AI systems. That way, customers don't have to reinvent the wheel.

This is a tale of the tape, and the numbers tell the story.

Over the past year, Himax has failed to keep pace with the broader S&P 500, down 7% to the market's 14% gain. During the same period, NVIDIA's stock has significantly outperformed both, gaining 214%. NVIDIA has the higher valuation you'd expect from a company performing at such a high level. 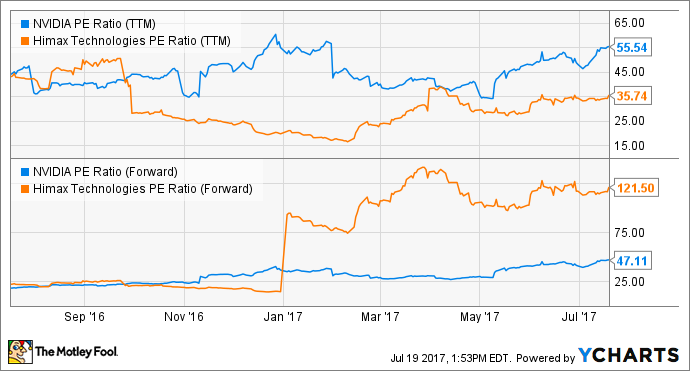 In terms of price to earnings, NVIDIA trades at a sky-high 56 times trailing earnings. Himax has a much less expensive multiple of 36. NVIDIA's higher multiple is an indication that investors are expecting continued execution and stellar growth.

Looking ahead offers a completely different story. Investors are betting that Himax can orchestrate a turnaround, and they believe its troubles are temporary, giving Himax a forward multiple of 122, compared with NVIDIA's forward valuation of 47.

With better stock performance and the companies split on valuation, the edge goes to NVIDIA.

Himax has a much higher dividend yield of 2.93%, compared with NVIDIA's minuscule 0.34%. NVIDIA's yield has fallen as its stock skyrocketed. In terms of payout ratio, Himax is spending 57% of its profits to fund its dividend, much higher than NVIDIA's 14%. This gives NVIDIA adequate room to raise its dividend, while Himax is already approaching a rate that's unsustainable.

And the winner is... NVIDIA

These are clearly divergent paths for the two companies, with one executing flawlessly while the other struggles. NVIDIA has seen continued growth in its gaming segment, while successfully pursuing additional opportunities in AI. Himax, on the other hand, has seen its core products struggle, while it has been unsuccessful at developing new revenue streams. NVIDIA is clearly the winner between the two.