Shares are trading near 52-week lows. Does that represent a buying opportunity for Stericycle stock?

While most waste management stocks were busy beating the S&P 500 last year, leading medical waste disposer Stericycle (SRCL 1.62%) fell from all-time highs to five-year lows. Why? Investors suddenly grew impatient with a debt-laden strategy that has grown the top line without much else to show for it. That argument was justified, but perhaps Wall Street was being a little too impatient.

Long-term investors who debated buying the dip at the end of 2016 but failed to act may get a second chance: a brief rally in the first four months of 2017 didn't hold. That means the stock is now trading close to 52-week and multiyear lows. But does that mean you should buy the dip in Stericycle stock? 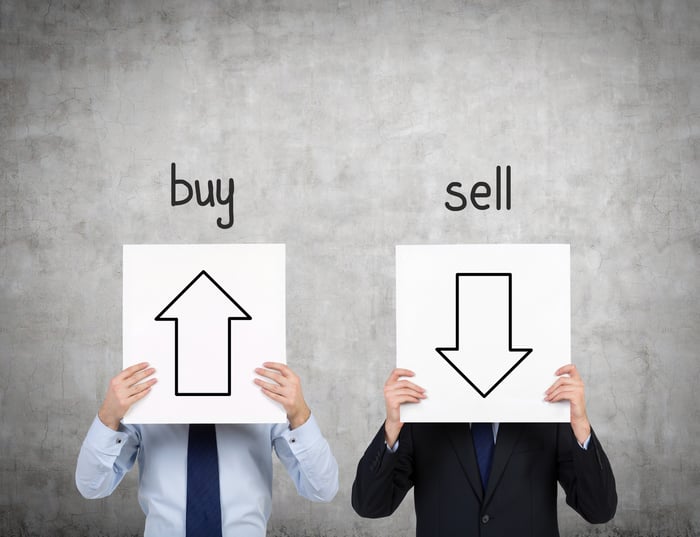 The case for buying

You may think it's puzzling that Wall Street is choosing to lose faith in management's strategy and vision now. Management has certainly demonstrated over the long haul that it knows what it's doing. Stericycle stock has delivered awesome gains to investors since debuting in the late '90s and in just about any other five- or 10-year period you can stratify. The only blemish is the stock's slide since late 2015. 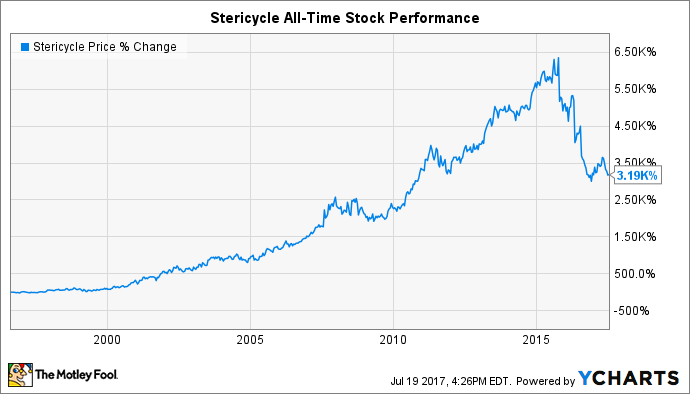 The company's long-term performance is pretty impressive. Revenue and adjusted EBIT-A (the company accounts for depreciation as a separate cost of revenue line item) have grown every year since 2007, from just $933 million and $244 million then to $3.56 billion and $728 million in 2016, respectively. Adjusted EPS has increased in a similar fashion, from $1.45 in 2007 to $4.53 last year.

Stericycle's growth doesn't appear to be in danger of ending anytime soon. The company says it owns 10% market share of a global market opportunity worth $37 billion. In addition to the historical acquisition-based growth model executed to date, it also expects to wring out another $650 million to $950 million in incremental organic revenue from existing markets and customer relationships. That represents 18% to 27% growth from 2016 revenue -- and it only includes organic opportunities.

Management is also focused on reducing debt levels, which grew quite a bit to make the $2.3 billion acquisition of Shred-It in 2015. After paying off $254 million in long-term debt last year, Stericycle expects to throw another $225 million to $275 million at debt reduction this year.

The ultimate goal is to drive the debt-to-EBITDA (the traditional earnings metric this time) ratio to 2.5. At the end of March 2017 it registered at 3.38, but it should also be easier to move the needle going forward considering that free cash flow has swelled to record levels in the past 12 months. 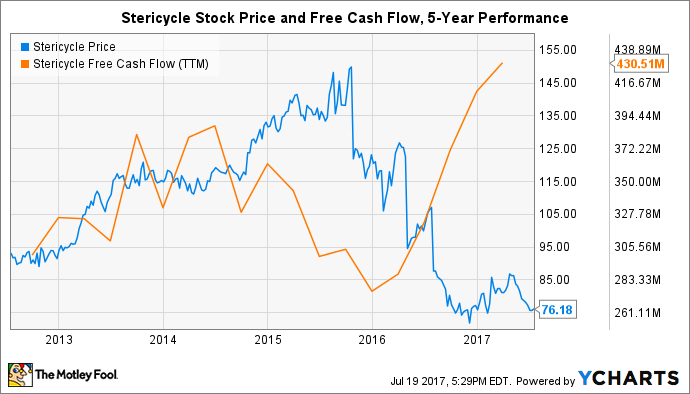 Of course, even with management's established track record and the long-term opportunities at hand, there are also solid reasons for Wall Street's pessimism.

The case against buying

One of the most important aspects of owning a business is turning a profit. Stericycle is in no danger of losing money, but its top-line growth in recent years has not translated into commensurate success at the bottom of the income statement.

In fact, the company's GAAP EPS has fallen in each of the last two years. Worse, it coincides with the massive acquisition of Shred-It in July 2015. Therein lies the explanation for Wall Street losing faith in management.

Stericycle reports adjusted EPS, which is a non-GAAP measure. Things appear to be going swimmingly by this account, but the GAAP EPS tells a different and potentially more worrisome story.

It gets worse when you consider that both adjusted EPS and GAAP EPS had grown every year from 2007 through 2014, which again points a finger at the Shred-It acquisition. Currency issues have played role as well, but more specifically, expenses have been rising across the business in recent years -- hinting that integrating the lower-margin business into the Stericycle universe has hit a few snags. Total revenue grew 39% from 2014 to 2016, but operating income slipped 22%.

Separately, the global market opportunity claimed by Stericycle may also be a bit overblown. Last year the company generated $2.66 billion in revenue from American customers, while the remainder came from international business. Yet, the total $37 billion global market opportunity is comprised of a $16 billion market in the United States and $21 billion from the combined potential of every other region.

When viewed from this perspective, the company has a 17% market share in the United States, but only a 4% market share in international markets. In other words, it needs to greatly expand overseas -- where its business is severely underweighted -- to make good on the global opportunity. Sizable expansion may never happen. And if it does, it could be awfully expensive.

Should you buy Stericycle stock?

It's important to note that analysts covering the stock do expect better days ahead, as evidenced by a forward PE ratio of 15.8 -- well below the 39.7 times trailing earnings valuation at present. Moreover, earnings should rise simply from paying off debt: Rising interest expenses drained an additional $0.37 from EPS in 2016 compared to 2014.

Whether or not the company can rein in expenses to boost margins remains to be seen. It's the one thing I would like to see demonstrated -- for at least a few quarters -- before I consider buying the stock. Then again, if that occurs, I may be buying the stock at higher prices. So if you believe the company will pull through in the long term, then the dip is certainly a buying opportunity.

10 stocks we like better than Stericycle
When investing geniuses David and Tom Gardner have a stock tip, it can pay to listen. After all, the newsletter they have run for over a decade, Motley Fool Stock Advisor, has tripled the market.*

David and Tom just revealed what they believe are the 10 best stocks for investors to buy right now… and Stericycle wasn't one of them! That's right -- they think these 10 stocks are even better buys.

Why Stericycle Stock Rebounded 13% in September

Is Stericycle Destined for Greatness?