Shares of Integra LifeSciences (NASDAQ:IART), a medical device company that focuses on surgical products, fell as much as 11% in early morning trading on Wednesday after the release of second-quarter earnings.

Here's a review of the key metrics from the second quarter:

Profitability and cash flows were strong in the second quarter, while revenues came in at the low end of our guidance range. While Dural Repair underperformed, new product introductions and acquisitions performed well, giving us confidence that revenue growth will accelerate in the second half of this year.

Arduini also said that the company remains on track to complete its planned acquisition of Codman Neurosurgery, which is a business currently owned by Johnson & Johnson, for $1.045 billion in the fourth quarter. 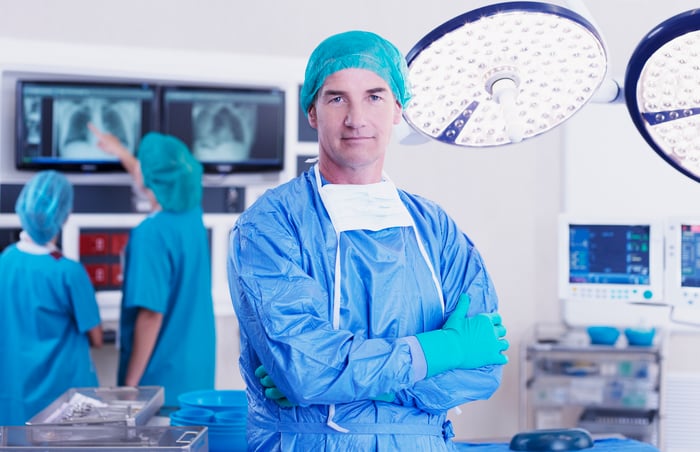 Turning to guidance, Integra tightened its full-year 2017 revenue guidance to a range of $1.125 billion to $1.140 billion. Management also revised its full-year organic sales growth down to a range of 6% to 7% from its prior outlook of 7% to 8.5%. The change reflects the recent weakness that it is seeing in Dural Repair.

Traders appear to be reacting harshly to the disappointing revenue result and lowered organic growth guidance. That reaction isn't a surprise when you consider that Integra's stock had climbed nearly 30% since the start of the year.

Arduini believes that the upcoming Codman Neurosurgery purchase will be a "transformational acquisition" for the company. Given its size, I think that is an accurate statement. Codman's sales totaled about $370 million in 2016 and it generated an EBITDA margin of 31%, so this transaction promises to have a meaningful impact on Integra's top and bottom lines. On the flip side, Integra plans to fund the acquisition primarily with debt. In my view, that raises the deal's risk profile significantly.

Will the company be able to successfully integrate such a huge acquisition? That question remains unanswered. However, with such a large and risky transaction waiting in the wings, I personally plan on avoiding Integra's stock for the time being.