Paycom Software's (NYSE:PAYC) shareholders have enjoyed a heck of a ride recently. The company's stock is up more than 50% year to date as demand for the company's cloud-based human capital management (HCM) software remains strong. And with shares currently trading at a price-to-earnings ratio of more than 80, to say expectations are running high is an understatement.

Can Paycom's growth train keep chugging along at the heady rates of the past several quarters? Here are a few of the items I'll be watching most closely when the company reports second-quarter earnings on Aug. 1. 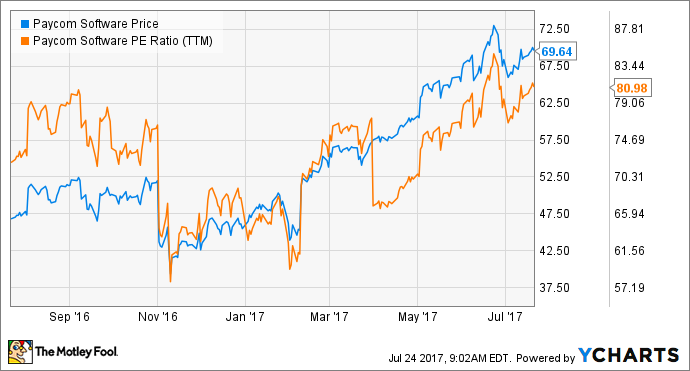 A tough revenue hurdle to clear

Last year, Paycom posted sizzling second-quarter revenue growth of 51%, setting up a challenging year-over-year comparison. Even so, the company is guiding for second-quarter revenue of $94.5 million to $96.5 million, which represents healthy growth of 29.2% at the midpoint. That result would be more or less in line with Paycom's long-term target of 30% annual revenue growth -- represented in the company's full-year guidance of $426 million to $428 million.

On average, analysts are expecting quarterly revenue of $95.7 million, which would represent 29.6% year-over-year growth. And for the full year, analysts are betting that Paycom will meet the high end of its own revenue guidance, with an average estimate of $428.2 million.

What to watch for: Whether the company meets its guidance. With such positive sentiment already priced into the company's shares, Mr. Market is not likely to receive kindly any quarterly shortfall or reduction in yearly guidance.

Paycom primarily targets companies with between 50 and 2,000 employees. Many of these smaller businesses currently use a handful of different vendors for payroll and workforce management software and may also try to tackle certain tasks in-house -- making them particularly receptive to Paycom's all-in-one HCM solution.

The beauty of Paycom's business model, however, is that the company receives a per-employee fee as part of its licensing agreements, which gives the company plenty of incentive to sign larger customers as well. CEO Chad Richison has a history of highlighting during each quarter's earnings call a few new customers in the 2,000- to 8,000-employee range. While Paycom will remain focused on what it calls the mid-market, it's beginning to see increased attention from up-market companies, and these customers represent a big incremental opportunity for top-line expansion.

What to watch for: Whether Paycom's winning track record with larger companies continues.

That said, 2017 will be something of an investment year for Paycom as it prioritizes top-line growth by making substantial investments in its sales team, R&D, and marketing. While the company's first-quarter EBITDA margin was a very impressive 39%, it expects the aforementioned expenses to increase throughout the year, driving margin lower. Paycom's second-quarter guidance for adjusted EBITDA is $22 million to $24 million, which represents an adjusted EBITDA margin, assuming revenue of $95.5 million, of around 24% at the midpoint.

What to watch for: Any signs that expenses -- particularly for R&D or Paycom's sales force -- will come in higher than anticipated, which could jeopardize the company's full-year 2017 guidance for EBITDA of $117 million to $119 million, which represents adjusted EBITDA margin of 28% at the midpoint.

Investors continue to expect a lot from Paycom, and like any stock priced for perfection, its share price can be pretty volatile around earnings time. While it's possible the stock may have gotten ahead of itself recently, any stumble that provides a lower-priced entry point may be a good opportunity to get in on what appears to be a compelling long-term growth story.