There it goes again. Expedia (NASDAQ:EXPE), announcing the latest in a very long string of strategic purchases, said it made a $350 million one in Traveloka Holding, an up-and-coming online travel agency (OTA) based in Indonesia. Like its top competitor, Priceline Group (NASDAQ:BKNG), Expedia has grown to immense size, largely through its investments.

This one is a bit atypical, as it's directed toward a company based in Asia -- which, in my opinion, clearly demonstrates that it's walking the walk in its stated ambition to grow its presence abroad.

Traveloka's website portal has the look, feel, and basic functionality of Expedia's. It emphasizes destinations and hotels in its native country, as well as the broader Southeast Asian region. 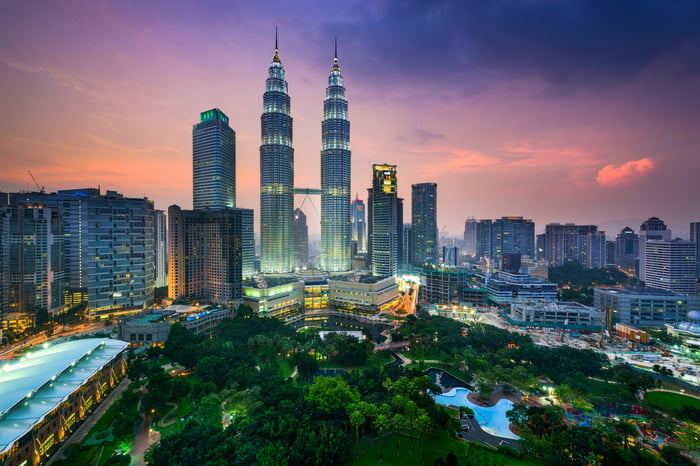 According to Expedia CEO Dara Khosrowshahi, it's "the clear online travel leader in Indonesia and is expanding aggressively throughout Southeast Asia."

This is beneficial to Expedia. "Our partnership will benefit from each side's expertise and local knowledge and accelerate our mutual growth," Khosrowshahi added. "We are incredibly excited to continue to expand our presence in Asia."

Expedia heads the investor list for Traveloka; that $350 million is the bulk of the $500 million total invested in the company's last two funding rounds. Other investors include noted Silicon Valley venture-capital operator Sequoia Capital and Chinese e-commerce powerhouse JD.com (NASDAQ:JD). It's a good sign that Traveloka can attract such benefactors -- Expedia, Sequoia Capital, and JD.com are heavyweights in their fields.

Expedia's growing involvement with a promising, Expedia-ish Asian peer grows its presence in a very strategic OTA market. According to projections from research company eMarketer, digital travel sales in the Asia-Pacific region are on track to eclipse sales in the U.S. this year. A much higher annual growth rate (22% vs. 5%) will lead the former to come in at nearly $216 billion, against a U.S. tally of $200 billion.

That's because the American OTA space is crowded and relatively mature. It's dominated by the duopoly of Expedia and Priceline, but it's also home to a gaggle of smaller companies eager to get a piece of that multibillion-dollar business.

So for an ambitious company hungry for growth -- as Expedia has always been -- it pays to look abroad. Asia, with its massive size, its numerous growing economies, and its relative OTA under-penetration, is a fine choice at the moment.

Placing a big bet on an Asian OTA supported by serious players like JD.com also gives Expedia a stronger presence on international markets, which is welcome for this still very U.S.-centric operator. In the first half of this year roughly 36% of the company's gross bookings came from international markets, a figure that hasn't been growing robustly -- it was 21% way back in 2005. Foreign-derived revenue was 43% of the total top line.

By contrast, Priceline lives and dies on international markets. These were responsible for 88% of gross profit in the company's fiscal 2016.

Expedia's stated goal is for non-U.S. revenue to comprise two-thirds of the total figure. Moves such as the Traveloka investment bring it that much closer to this aim. Given the size of Expedia's cash pile -- nearly $3.4 billion at the end of March, which was almost 60% higher than at the same time last year -- $350 million isn't too heavy. So in my humble opinion, the Traveloka buy-in is definitely money well spent.