If you're an investor in the automotive industry, one of the best ways to keep your finger on the pulse of the industry is to dig into dealership group earnings. And what better way to do that than by following AutoNation, Inc.'s (NYSE:AN) results -- after all, it's America's largest automotive retailer. The company also boasts one of the most outspoken and honest CEOs in the industry, Mike Jackson. Here are the details from AutoNation's second-quarter results -- which sent its stock 7% lower during intraday trading -- and what's next for investors.

Investors had braced for a tough quarter based solely on the fact that the light-vehicle sales market in the U.S. is currently peaking, which will make even a healthy business face increasingly difficult year-over-year comparisons -- welcome to the world of investing in cyclical industries.

That said, AutoNation's combined retail vehicle unit sales dropped 3% compared to the prior year, and were down 2% on a comparable-store basis. Two of its most important markets, Texas and Florida, which represent almost 45% of AutoNation's total retail sales, faced challenging conditions and weighed on results with their combined 6% comparable-store sales decline. 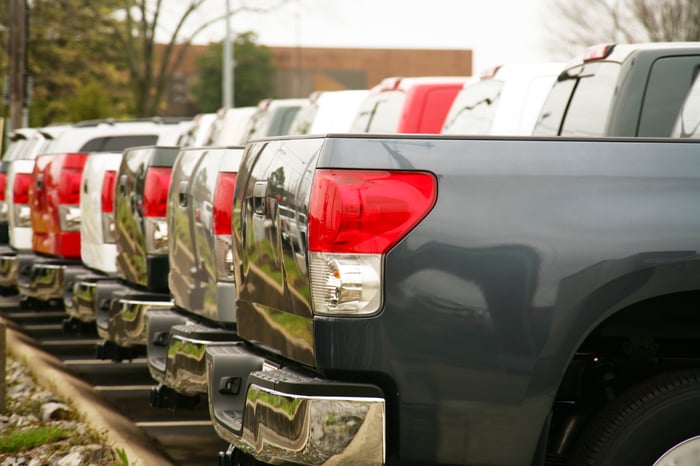 The sales decline pushed revenue lower, down 3% from $5.44 billion during last year's second quarter to $5.28 billion during this year's, and well below analysts' estimates of $5.54 billion. That weaker-than-anticipated result filtered down to the bottom line as well: AutoNation's second-quarter net income from continuing operations dropped 22% to $88 million, or $0.86 per share. That compares unfavorably to last year's $112 million, or $1.08 per share, and below analysts' estimates of $0.97 per share.

This isn't an isolated event, either, as Group 1 Automotive (NYSE:GPI), the nation's third-largest dealership, posted a 16% decline in its second-quarter net income compared to the prior year. Group 1's total revenue also dropped 4% during the quarter, and, like AutoNation, the company also saw significant losses in the important market of Texas: Management noted that combined new and used sales dropped 7% there (especially in Houston, which is the company's single largest market), as well as in Oklahoma. That provides some solace for AutoNation, as it's not a company problem so much as it is a regional speed bump which is likely a ripple effect from energy sector weakness.

Jackson made it pretty clear on the conference call that AutoNation would have to pull levers to grow and expand profitably, rather than rely on favorable selling strategies from OEMs. The company is doing that through two avenues: brand extension and franchise acquisitions.

In terms of its brand extension strategy, it's essentially expanding its operations and has opened two auto auctions and three collision centers since the beginning of 2017. That brings its collision center total to 72 from coast to coast, and it remains a very profitable entity for AutoNation. Consider that parts and service generated a modest 16% of AutoNation's revenue during the second quarter but represented 46% of the company's second-quarter gross profit.

In terms of AutoNation's acquisition strategy, it also announced the acquisition of Alpine Jaguar in Florida, representing $68 million in annual revenue. AutoNation also announced it was awarded a Jaguar Land Rover add-point -- the opening or reopening of a new point of sale -- in Delray Beach, Florida, which management anticipates will add $130 million in annual revenue once fully operational.

AutoNation has a number of positive qualities to offer investors. It has the ability to change its sales mix to more quickly focus on consumer trends -- the recent switch that favors SUVs over passenger cars, for example. It also doesn't have to rely on any single, or handful, of brands as OEMs must. And it can focus on luxury franchise acquisitions, such as the aforementioned Jaguar franchise, to help margins when the industry sales plateau, rather than on lower-priced mainstream-brand franchises. But despite all of those positive aspects, it's clear that increasing comparable sales is going to be difficult, and that expansion through franchises might not provide enough growth for investors to buy into as the U.S. industry peaks. Stay tuned: The next six months will be very telling for the health, direction, and investment potential of the industry.