Quarterly revenue climbed 4.5% year over year to $139.4 million, driven by a combination of 11 new stores having opened over the past year, a 1.3% increase in same-store sales (which was well above guidance for comps to be flat), and Boot Barn's acquisition of the CountryOutfitter.com site in June. On the bottom line, Boot Barn's net income increased by a third to $0.8 million, or $0.03 per share, up from $0.6 million, or $0.02 per share in the same year-ago period. By comparison, analysts' consensus estimates predicted a breakeven quarter on lower revenue of $137.4 million. 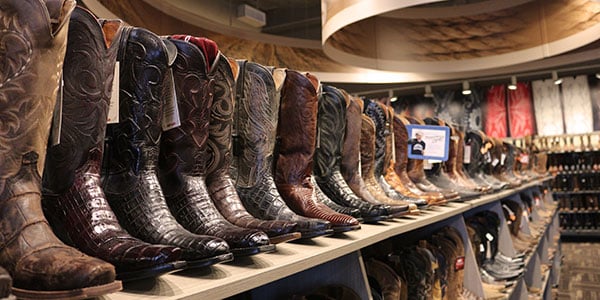 "We are encouraged with our start to fiscal 2018, as sales and earnings per share both exceeded expectations," added Boot Barn CEO Jim Conroy. "We believe our commitment and focus on the store business have helped return us to positive store comps during the quarter, a trend that has carried into the second quarter."

Conroy elaborated that stores in oil and gas markets have continued to improve as well, and the company is making progress improving organic search and site speed at its sheplers.com domain name, following technical problems transitioning the site to a new software platform earlier this year.

For the current fiscal second quarter, Boot Barn expects same-store sales to be roughly in line with those in fiscal Q1, which should translate to net income of breakeven to $0.02 per share. Finally, Boot Barn reiterated its guidance for same-store sales growth for the full fiscal year to be flat to slightly positive, and for full fiscal-year net income per diluted share of $0.52 to $0.57.

In the end, this was a solid performance with a surprise profit from Boot Barn. With shares down nearly 39% year to date going into this report, it's no surprise to see investors aggressively bid up Boot Barn stock today.