When it cones to delivering a product people like, Verizon (NYSE:VZ), AT&T (NYSE:T), and T-Mobile (NASDAQ:TMUS) have done a surprisingly good job of keeping people happy, according to a new report from J.D. Power. Sprint (NYSE:S) doesn't score quite as well as its rivals, but all four companies run the risk of losing customers if those users actually need to interact with their carriers.

That general customer content (albeit to a much-lower extent with Sprint) bodes well for the major wireless carriers. Poor customer service when something goes wrong could cause that satisfaction to disappear, J.D. Power found it its 2017 U.S. Wireless Customer Care Full-Service Performance Study -- Volume 2.

"A fast resolution to a problem -- whether companies try to solve it in-store, online, or through social media -- is the best way to both avoid customers' ire and curb their temptation of switching providers," wrote the consumer insights, advisory services, and data and analytics company. "This means reducing wait times, training staff to be skilled and knowledgeable, and solving the problem on the first try are issues of paramount importance."

Data from the study noted that there is considerable room for improvement in customer-service related areas. Consumers were specifically upset about the level of effort it takes to get the help they needed. 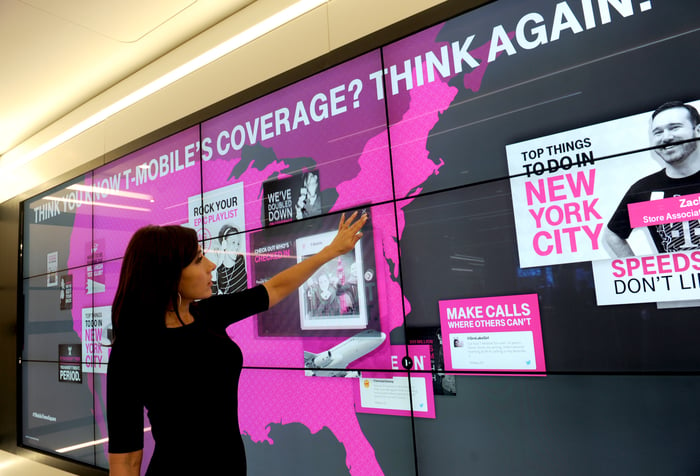 T-Mobile has worked to improve its network. Image source: T-Mobile.

Verizon, which recently scored a win on the twice-annual RootMetrics Mobile Performance in the United States report, also took first place here, scoring a 797 out of 900. AT&T came in second with a 796, with T-Mobile just behind at 795. Sprint brought up the rear, scoring a 723. The top three carriers all rated five "Power Circles," which marks them as "among the best," while Sprint scored two, ranking it with "the rest."

J.D. Power surveyed 9,994 customers who contacted their carrier's customer-care department within the past three months to compile the two studies. In both cases, the research was done from January through June 2017.

In addition, how long customers spent on hold and whether their carrier solved their issue on the first try greatly affected satisfaction. "The first-contact resolution rate is 85% among those who strongly or somewhat disagreed that it required a lot of effort to resolve their most recent issue, compared with only 31% among those who strongly or somewhat agreed," according to J.D. Power.

The studies also found that while only 5% of customers used social media to resolve issues, those who do have higher satisfaction levels (841 versus 792). In general, people would prefer to solve their issues over the phone. More than half (56%) of those surveyed said that resolving a problem online requires a lot of effort, similar to the 54% who feel that about in-store help. Only 49% of respondents felt that way about trying to solve their problems over the phone.

"Nobody wants to spend a lot of time trying to deal with an issue they shouldn't have had in the first place," said J.D. Power's Peter Cunningham. "Customers believe carriers have a ways to go when it comes to reducing the amount of effort involved in problem resolution. But if carriers focus on it, they will likely see churn decrease and profits increase."

The top three carriers clearly have a good enough product that many customers never encounter a problem. The breaking point for the industry comes when something goes wrong. That leads to possible frustration in getting a quick resolution and the possibility that the consumer will switch carriers.

"With wireless providers getting so competitive about pricing, coupled with the migration from the two-year contract, there are too many options for customers to stay in bad wireless relationships," Cunningham said.

Basically, the best way for any carrier -- but most specifically Verizon, AT&T, and T-Mobile -- to hold on to customers is for them to improve customer service. That seems like a relatively easy fix, though it's one on which the industry has perhaps neglected to spend money in favor of other areas, including improving their networks.