Please ensure Javascript is enabled for purposes of website accessibility
Log In Help Join The Motley Fool
Free Article Join Over 1 Million Premium Members And Get More In-Depth Stock Guidance and Research
By Lee Samaha - Updated Aug 4, 2017 at 6:02AM

The commercial property services company continues on its growth path, as investors wait for earnings growth to kick in in the future.

Commercial property services company Jones Lang LaSalle (JLL -0.35%) strategic growth plan remains on track, but you wouldn't think it from looking at its declining EBITDA in the first half of the year. No matter, it's all part of the company's acquisition-led expansion plans, which management hopes will generate strong earnings growth in the years to come. The second-quarter earnings saw the company aggressively growing its top line while generating what management called "underlying operating momentum."

As you can see above the strong revenue growth hasn't translated into earnings growth just yet, but it's largely a consequence of actions taken to generate long-term growth. Let's take a look at them. 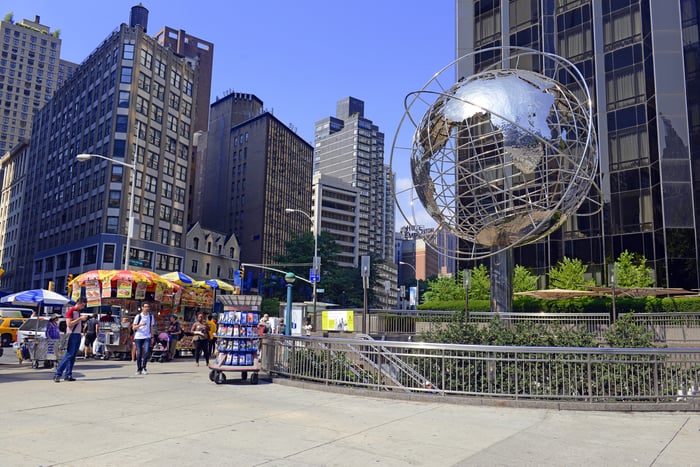 However, she also said that "nearly 90% of the acquisitions completed" continued to growth in annuity revenue. Essentially, this means Jones Lang LaSalle earnings will be less volatile through real estate cycles, but it also implies some margin dilution--at least initially, and merger and acquisition contributions were responsible for a 100 basis point reduction in adjusted EBITDA margin in the quarter.

Furthermore, the business expansion is helping create the need for investment in technology and data--responsible for a 70 basis point decline in adjusted EBITDA margin in the quarter. Lastly, LaSalle Investment Management (JLL's real estate investment company) incentive fees fell to $15.3 million in the quarter compared to $66 million in the same period last year as a result of "the life cycle of fund maturities and asset disposition plans in various funds" according to Kelly. This helped create a 160 basis point reduction in adjusted EBITDA margin from LaSalle in the quarter.

Nonetheless, management stuck to its forecast of adjusted EBITDA margin of 10%-12% for the full-year with 8%-11% fee revenue growth.

Breakout of revenue and EBITDA

It's useful to breakout earnings by segment in order to see how Jones Lang LaSalle made money in the quarter. As you can see in the table below the negative impact on adjusted EBITDA from LaSalle was significant. Moreover, the fall in margin in the Europe, Middle East and Africa segment--due to acquisition integrations (largely Integral) and technology investments--also negatively impacted earnings growth.

In a nutshell, topline revenue growth looks good and management will be focused on expanding margin as it comes out of its investment phase, while securing long-term annuity revenue.

Investors will be looking for margin expansion in the future, starting with earnings growth in 2018 as revenue expansion drops into the bottom-line. As ever with commercial real estate, the key question is over the longevity of the real estate cycle, but given the improving macro-economic environment --described by CEO Christian Ulbrich as being "solid" -- it's reasonable to expect more underlying growth to come.