The shares of Alcoa Corp. (NYSE:AA), one of the largest aluminum producers in the world, rose 11.5% last month. The bulk of that gain came after July 11, when it announced it was partially restarting a facility it had shuttered. That news was followed by a solid second-quarter earnings release on July 19. In sum, there appear to be a number of positives on the horizon. 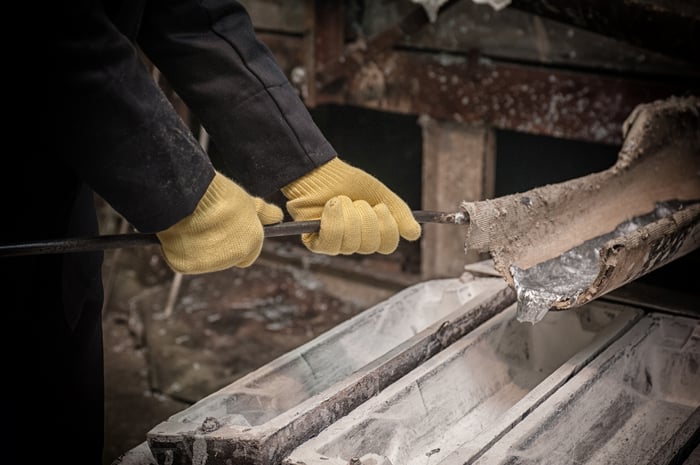 In and of itself, word of the partial restart of the smelter at the Warrick rolling plant wasn't all that exciting. That facility was closed in early 2016, and just three of the five smelters at the plant will be restarted. What was really interesting was the logic behind the move -- Alcoa says it's doing it to better position itself to meet the future demand it is anticipating.

Supporting that, when the company reported Q2 earnings a few days later, it increased its aluminum demand growth projections for 2017 from 4.5% to 5% to 4.75% to 5.25%. Although the company reports that supply and demand are close to balanced today, increasing demand over time would mean more growth for the aluminum industry and Alcoa in the future. And it looks like Alcoa is preparing for just such a situation. Note that those to-be-restarted smelters won't be up and running until the second quarter of 2018.

The Q2 2017 report, meanwhile, was solid. Adjusted earnings of $0.62 a share were essentially on par with the first quarter, but well above the loss of $0.23 a share the aluminum giant saw in the year ago period. The sequential decline was due to lower aluminum prices. Alcoa's shipments, however, were up 8% sequentially, which helped to offset the aluminum price decline. On the balance sheet, debt remained about the same through the first half of the year, but cash increased by nearly 12%. In short, Alcoa is doing pretty well financially.

Aluminum is an increasingly important metal in the world. As with all commodities, its prices will wax and wane over time. Alcoa, however, has been working hard to get its business into leaner fighting shape, particularly after spliting off Arconic, its former specialty parts business. The restart news and earnings update were both signs of continuing progress, with subtle indications that demand for aluminum remains strong. Investors should be pleased with what they see here.