Shares of semiconductor equipment provider Veeco Instruments (NASDAQ:VECO) slumped on Friday despite a positive second-quarter report. The company beat analyst estimates across the board, and it guided for continued revenue growth during the third quarter. Nevertheless, the stock had dropped about 20% by 1 p.m. EDT.

Veeco reported second-quarter revenue of $115.1 million, up 52.9% year over year and $14 million above the average analyst estimate. This revenue included one month of revenue from Ultratech, which the company acquired this year. Excluding this extra revenue, Veeco stated that its results were in line with its guidance. While Veeco's revenue grew compared to the same period last year, it's down compared to the same period two years ago. 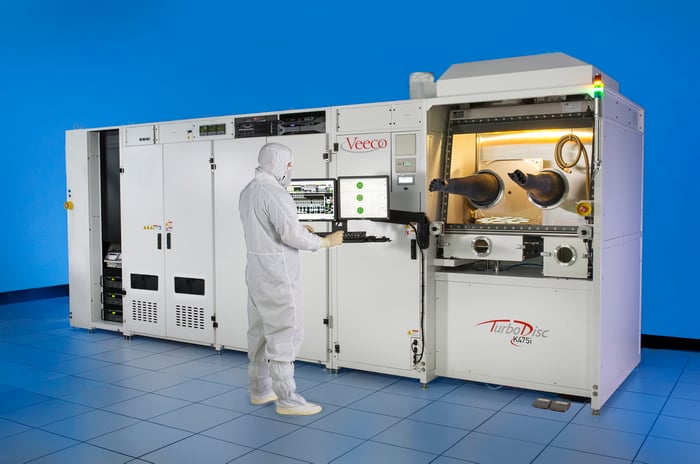 Non-GAAP earnings per share came in at $0.15, up from a loss of $0.19 during the prior-year period and $0.11 higher than analysts expected. GAAP net loss was $18.4 million, with acquisition-related costs of $14.1 million knocking down the bottom line.

Veeco CEO John Peeler sees a solid second half on the horizon: "The integration of Ultratech is proceeding well and we are very optimistic about the potential synergies in both revenue and costs. In addition, LED industry conditions continue to improve, and we believe we can achieve a stronger second half of 2017."

Veeco expects to produce between $125 million and $145 million of revenue during the third quarter, up from $85 million in the prior-year period. Non-GAAP EPS is expected between a loss of $0.09 and a gain of $0.09, breakeven at the midpoint.

Weak guidance for non-GAAP EPS may be the driver behind the stock's decline on Friday, especially considering that revenue will be up compared to the second quarter. Integrating Ultratech should eventually bear fruit in the form of cost synergies, but the bottom line isn't expected to benefit during the third quarter.