Wal-Mart (NYSE: WMT) and Target (NYSE:TGT) desperately want to catch up with Amazon's (NASDAQ:AMZN) ability to offer two-day delivery on millions of items available to members of its $99-a-year Prime program. Wal-Mart invested $3.3 billion buying Jet.com and placed its founder Marc Lore in charge of its digital operations. That was followed by Lore dropping the retailer's $50-a-year ShippingPass program and replacing it with free shipping on orders over $35.

Target (NYSE:TGT) has competed with shipping pricing deals, at least during the holiday season, but it has not made similar major infrastructure investments. That may be changing as the retailer announced yesterday it has agreed to purchase Grand Junction, which it described as a "transportation technology company." The acquisition will "improve and expand Target’s delivery capabilities ... [and] accelerate Target’s investments and ongoing efforts to transform its supply chain," the company said in a press release. 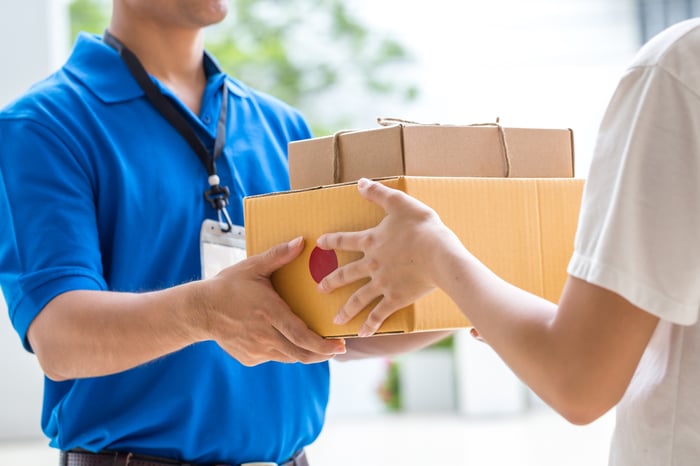 Terms of the retailer's plans to buy the San Francisco-based company that provides software and carriers to help companies provide local delivery throughout North America were not disclosed. "With this acquisition, Target will have immediate access to Grand Junction's technology and carrier network, which will accelerate the work we're doing to improve our speed of delivery," said Target Executive Vice President Arthur Valdez in a blog post. "It will also boost our ability to offer new services -- like same-day delivery, and even assembly and installation -- to our guests."

The two companies have already been working on a same-day delivery test at one of Target's New York locations. Grand Junction CEO Rob Howard will join Target as a vice president. He explained how his company's service works in the blog post.

"Grand Junction offers a software platform that allows retailers to determine the fastest, most efficient method for local deliveries" he said. "We've also built a network of more than 700 carriers who connect to the platform, essentially creating a marketplace for local delivery. The platform also gives retailers visibility of deliveries and tracks carrier performance."

What could this mean for customers?

Target expects to expand its same-day delivery to other cities. It also plans to leverage the Grand Junction delivery network to improve delivery across the chain.

This is only one step for Target, but it's an important admission that figuring out how to offer efficient delivery is a problem that's very different from others faced by brick-and-mortar retailers. Like Wal-Mart admitting it needed a digital-first pioneer like Lore leading its efforts, this is Target understanding that it needs to bring in a different type of thinking.

Beating, or even equaling, Amazon is a massive challenge. The online leader was built from the ground up as a pure digital play. It does not have to deal with legacy issues nor does it have to supply stores.

One deal won't get Target all the way there, but acknowledging that its supply chain deserves dedicated focus from digital-first thinkers may eventually help it become a better Amazon rival.