Let's be clear: Twitter (NYSE:TWTR) will never ban President Trump. On numerous occasions, Twitter has insisted that its rules apply to all accounts -- including Trump's -- yet receives ongoing criticism surrounding its inaction when our Tweeter in Chief objectively, consistently, and plainly violates its terms of conditions. Everything from targeted cyberbullying to harassment to promoting violence or even unlawful lobbying for legislation -- you name it.

Part of Twitter's ambivalence is undoubtedly tied to the fact that Trump has created a whole new level of political engagement on the platform, even if that engagement isn't directly translating into monetization or more ad sales at this point. Similar to the first quarter, ad revenue in the second quarter fell 8% despite a meaningful gain in engagement, as indicated by a 12% increase in daily active users (DAUs). 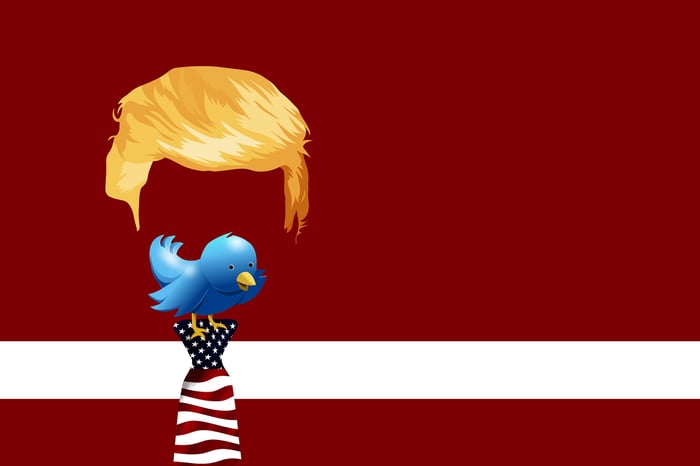 One analyst has even taken the Trump aspect of the Twitter investment thesis a step further. Monness Crespi Hardt & Co. analyst James Cakmak, who has a neutral rating on Twitter shares, has now put out a research note estimating that if Twitter were to ban Trump (or in the unlikely event that Trump stopped tweeting), Twitter's market cap could drop by $2 billion, Bloomberg reports.

Cakmak acknowledges that Twitter has not been able to sufficiently monetize Trump-related engagement, so the hit wouldn't be to tangible financial results. Rather, Trump has elevated Twitter and given it more credibility as a platform for real-time news -- a core aspect of Twitter's value proposition. On the February earnings call, CEO Jack Dorsey made it clear (emphasis added):

On your first question, what I would say is that the President's use of Twitter has broadened the awareness of how the platform can be used, and it shows the power of Twitter. When he tweets, it sparks conversation and discussion. So at a macro level, discussion of the platform really helps us be the best at showing what's happening in the world, and more discussion strengthens our key differentiators, in comprehensive and fast.

It's certainly true that Trump's tweets create entire news cycles, and in some cases his pronouncements come as news to his own team, such as his ban on transgender people serving in the military. This plays directly into Twitter's broader strategy, which has helped differentiate its platform from Facebook (NASDAQ:FB). Facebook has tried to move more into real-time news as well, but with little success. Twitter doesn't have many advantages over Facebook, but breaking real-time news is one of them.

Simply put, Trump's Twitter account is far too important for the beleaguered microblogging platform, at least strategically if not financially. "There is no better free advertising in the world than the president of the United States," Cakmak told Bloomberg.

Is This Why Twitter Will Never Ban Trump? @themotleyfool #stocks $TWTR $FB Next Article
Current