Shares of Zoe's Kitchen Inc. (NYSE:ZOES) dropped as much as 12.6% on Friday despite better-than-expected second-quarter results from the fast-casual restaurant chain.

Analysts, on average, were looking for a breakeven quarter on higher revenue of $77.7 million. 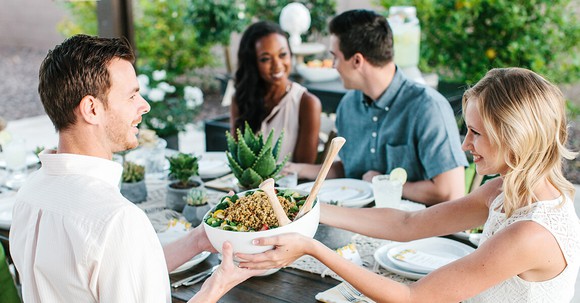 For perspective, investors should keep in mind that Zoe's stock popped more than 9% on both Wednesday and Thursday, with the latter move driven by an encouraging analyst upgrade just ahead of Zoe's formal earnings release.

"Results in the second quarter remained challenged," explained Zoe's Kitchen CEO Kevin Miles, "however, based on improved quarter-to-date trends, we believe we are still on track to meet our full year guidance. In the first half of this year, we made meaningful progress on multiple strategic initiatives."

To be sure, Zoe's is pleased with the introduction and early results of its revamped menu, and only just launched its new website -- which notably features improved online ordering capabilities -- earlier this month. In addition, according to Miles, Zoe's is on track to launch its new mobile app and loyalty programs in the third quarter.

Zoe's also reiterated its most recent full-year 2017 guidance, which calls for revenue between $314 million and $322 million, comparable-restaurant sales of flat to negative 3%, 38 to 40 company-owned restaurant openings, and restaurant contribution margin of 18.3% to 19%.

All things considered, apart from Zoe's slight top-line miss, this was a solid quarter that should please investors. And judging by its modest decline after two strong trading sessions earlier this week, it appears the market feels the same way.