If looking for a spot to watch the eclipse makes you hungry, then a number of chains have special deals or promotions for the extremely rare total solar eclipse that will occur on August 21, 2017.

Some of these offers last longer than the actual event, while others will be nearly as brief as the extremely rare solar eclipse. And though you're more likely to make memories watching the day turn to night than you are to remember that short-term deal on a doughnut you got, there are some decent values being offered.

Don't miss the eclipse in search of cheap meal or snack, but go ahead and save some money before or after the big events. Remember though, while it's perfectly fine to gaze upon the wonder of your discount treat, don't look at the actual eclipse unless you have the proper eye wear. 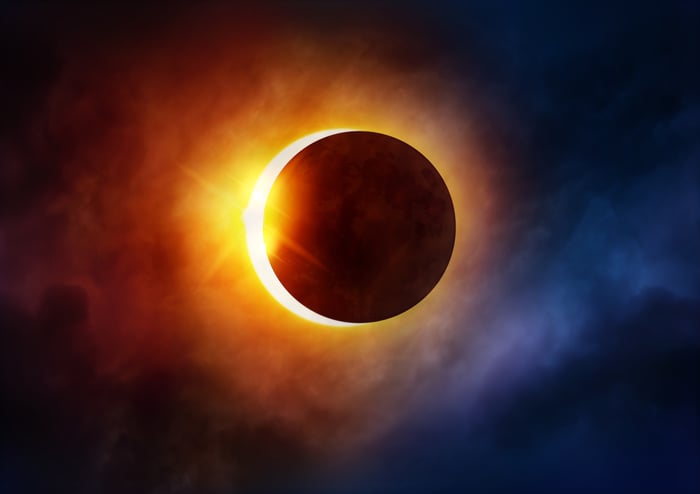 A number of chains have deals on eclipse day. Image source: Getty Images.

Dairy queen has a somewhat uninspired offer of buy-one, get-one for $0.99 Blizzards beginning on the day of the eclipse running through September 3. The ice cream chain also has a limited-edition version of the treat, the Triple Truffle Blizzard with fudge, peanut butter, and caramel truffles blended with vanilla soft serve offered during the same period.

Dunkin' Donuts (NASDAQ:DNKN) doesn't have an eclipse deal, but it is running eclipse trivia on its Twitter feed. Winners get a gift card. When it comes to the sun-blocking event Dunkin' has been eclipsed by rival Krispy Kreme. The doughnut chain will be covering its signature glazed doughnut with chocolate on eclipse day.

"The solar eclipse is a rare occasion providing a total sensory experience for viewers across the continental U.S. Chocolate will have the same effect as we introduce a first-time chocolate glazing of our iconic Original Glazed Doughnut," said Chief Marketing Officer Jackie Woodward in a press release.

In addition to those offers, Pilot Flying J is offering a free Milky Way or a pack of Eclipse gum with the purchase of any non-alcoholic beverage through its mobile app from eclipse day through August 25.

7-Eleven does not have an eclipse deal, but it does sell glasses that let people safely look at the phenomenon, though they are sold out in many locations. It also recommends that consumers should "purchase the exclusive shiny, selfie-inducing Chrome Dome Slurpee cup and lid," according to a press release. "The metallic dome top is perfect for taking reflective photos to be shared on social media.

Denny's (NASDAQ:DENN) has been running one of the more amusing eclipse promotions advertising "mooncakes." In the ad the company admits that "mooncakes" are really just its regular pancakes, but points out that they do look a lot like moons. On eclipse day, the chain will be offering $4 all-you-can-eat "mooncakes."

Shoney's will offer what it calls an Eclipse Survival kit with any purchase of an entree, sandwich, or buffet. The kits includes a pair of eclipse viewing glasses and a chocolate MoonPie.

Warby Parker, the eyeglasses chain, will be handing out eclipse glasses at all of its locations across the country through eclipse day. If your local store has run out, or you don't live near one of the chain's locations, the company also has template for making a pinhole projector on its website.

In addition to the deals above, a number of chains have local deals in areas that fall along the "path of totality" where the eclipse can be viewed fully. And, of course, if you just want to sit inside with a cold beverage, Frigidaire will hold its first-ever Blackout Sale, featuring products from the company's new Black Stainless Steel collection. Running through August 23, the sale will offer items in the collection at least 30% off.