It's a tough time to be a department store chain.

The retail format that thrived throughout the 20th century is struggling to adapt to the 21st. Department store sales are down 3.9%, according to the Census Bureau, continuing a years-long decline. It's not surprising, really. Cavernous, multi-floor stores that sell everything from clothes to home goods to jewelry to cosmetics just aren't needed in the way they used to be. Americans can buy most of that stuff online or visit a specialty store when they need something specific.

Department store stocks have gotten hammered this year along with much of the retail sector, but one chain is clearly rising above the rest -- Nordstrom Inc. (NYSE:JWN). While that stock is still down 7% this year, the company has made a number of strategic moves that give it a brighter future than peers like Macy's (NYSE:M), J.C. Penney, or Kohl's. 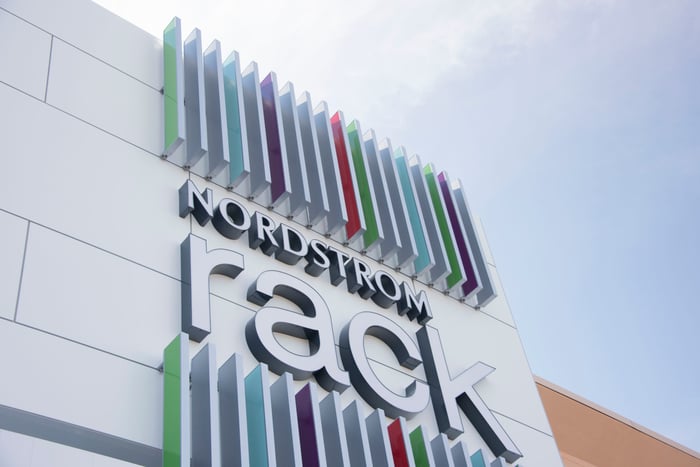 Nordstrom was the only one of the four to post comparable sales growth in the second quarter, showing off a 1.7% same-stores sales increase with the help of a successful Anniversary Sale event.

While many of its peers are closing, Nordstrom is still expanding. Let's take a look at a few of the ways it's beating the competition.

The edge in e-commerce

Nordstrom sensed the opportunity in online sales earlier than its peers and its investments have paid off. In the most recent quarter, the company posted 20% growth on Nordstrom.com and 27% on Nordstromrack.com/Hautelook, both of which accelerated from the previous quarter. Online sales made up a quarter of total retail sales in the recent quarter and could top $4 billion this year. While online sales are often lower margin than sales at physical stores -- which may partly explain why earnings per share fell slightly in the recent quarter -- Nordstrom's e-commerce strategy does a much better job of leveraging its store base. The company has only 116 full-line stores, compared to its peers, which have anywhere from 700-1,100, but it has a higher market cap than all of them in part because it uses its brand name and real estate much more efficiently with its e-commerce platform.

As a result of investing in e-commerce rather than new stores, Nordstrom is in a much stronger position than its peers. In fact, the founding family is so convinced that the stock was undervalued that it recently tried to partner up to take the company private. However, that plan now seems less likely to come to fruition.

TJX Companies (NYSE:TJX), the parent of T.J. Maxx, Marshall's, and Home Goods, has been one of the few success stories in retail as its off-price brands have continued to attract shoppers to the discounting, treasure hunt model, which is not easily transposed to the online channel.

Nordstrom is also ahead of its peers in the off-price category as it now has more than 200 Rack stores. The company launched the concept back in 1973 but has expanded it rapidly over the past five years, nearly doubling its total to 221. Performance at Rack stores has plateaued in recent years as sales per square foot have declined slightly, and in-store comparable sales are down 0.9% so far this year. However, the strategy is still being imitated by peers like Macy's, which is expanding its own off-price Backstage concept and Neiman Marcus is doing the same with Last Call. The Rack e-commerce division also seems to have a long runway ahead of it.

Where Nordstrom goes from here

The high-end department store chain is continuing to aggressively invest in tech and e-commerce with 40% of capital expenditures this year dedicated to digital operations like modernizing its tech platform and improving its fulfillment network.

But the company is also expanding into white space as it opens new stores in Canada and has a flagship opening planned in Manhattan in 2019. That store will be 367,000 square feet and will cost more than $500 million. A wide range of luxury brands will be featured, and it will include several restaurants. Nordstrom expects it to be its highest-volume store and is hopeful it will serve the same purpose as Macy's Herald Square, which is a tourist attraction in and of itself and casts a halo on the brand.

Nothing will be easy in traditional retail these days, but Nordstrom has a smart strategy to grow both online and offline. That opportunity and its track record show why the company should continue to outperform its peers.