Wall Street's getting pumped up when it comes to Planet Fitness (NYSE:PLNT). Shares of the discount gym operator hit an all-time high earlier this month after posting another blowout quarter, and analysts are paying attention to the growth stock's reps.

Dave King at Roth Capital sees more new highs in the near future. He is raising his price target from $23 to $27 on Monday, encouraged by the chain's strong membership growth and margin improvement in its latest report.

Last week it was George Kelly at Imperial Capital moving his goal post on the stock from $25 to $28. Kelly sees the shares continuing to track higher as deleveraging and franchising efforts intensify. Both King and Kelly naturally have bullish ratings on Planet Fitness. 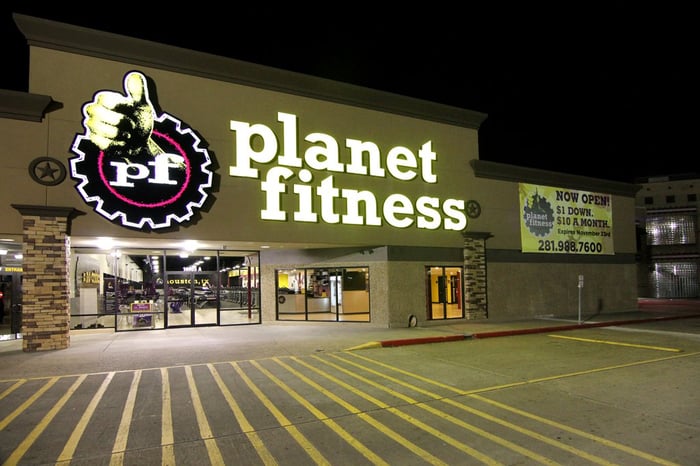 The bullish Planet Fitness update this morning out of Roth Capital's King offers several encouraging takeaways. King sees continued growth through expansion, membership gains, conversions to higher-cost plans, and royalty increases. Things are certainly clicking nicely at Planet Fitness. It has now scored 42 consecutive quarters of positive comps. They say that gym memberships are fickle, but when you're consistently growing unit-level production for more than a decade it's not a fluke.

King also sees significant potential in pushing Planet Fitness internationally, something that may calm the fears of those concerned about how many more units the chain can squeeze in domestically before it starts cannibalizing sales. It had 1,403 mostly franchisee-run gyms open at the end of June. Its first location in Panama will open in the fall.

Planet Fitness is not afraid of a vigorous workout. Revenue climbed 17% in the second quarter, the combination of a 9% surge in comps and brisk expansion. Adjusted earnings grew even faster, soaring 29% given the scalable advantages of Planet Fitness' model.

The platform is resonating, particularly with the masses that aren't typically drawn to sweaty gyms. With monthly rates starting at just $10 a month and topping off at $20 it's a far cry from the full-service fitness centers where hardbodies flex and the affluent tackle pilates. Planet Fitness announced in April that it topped 10 million active members.

Planet Fitness is making the most of retail trends where landlords are desperate to fill big-box vacancies that once housed dying superstores and department store chains. It's a story that is easy to get behind as long as the decade-long streak of positive comps continues. Whether we hit King's goal of $27 or Kelly's slightly more ambitious mark of $28, it's a safe bet that these price targets will continue to inch higher if Planet Fitness keeps up the pace.