So you want to invest in Brazilian stocks? Have a seat while I fetch you a glass of water: You must have been out in the sun too long.

It's true that the Indice Bovespa, the country's benchmark equities index, has posted a gain of roughly 20% over the last three years. But bear in mind that in January 2016, the midpoint of the last 36 months, the Bovespa had lost 35% of its value, before staging a recovery.

Brazil's changing fortunes are responsible for this volatility. After several years of growth in which the country enjoyed status as one of the up-and-coming BRIC countries (i.e., Brazil, Russia, India, and China), it appears to have executed a sharp U-turn in recent years.

The once vibrant Brazilian economy is reeling from government mismanagement and corruption scandals, as well as a weak currency, the real. Brazil's gross domestic product, or GDP, actually contracted in 2015 by 3.8%, and again in 2016, by 3.6%.

Nonetheless, dividend investors with a measure of risk tolerance can find enticing plays in Brazilian equities. Below, let's look at three high-quality companies which lead their respective industries, and demonstrate decent total return potential to boot. 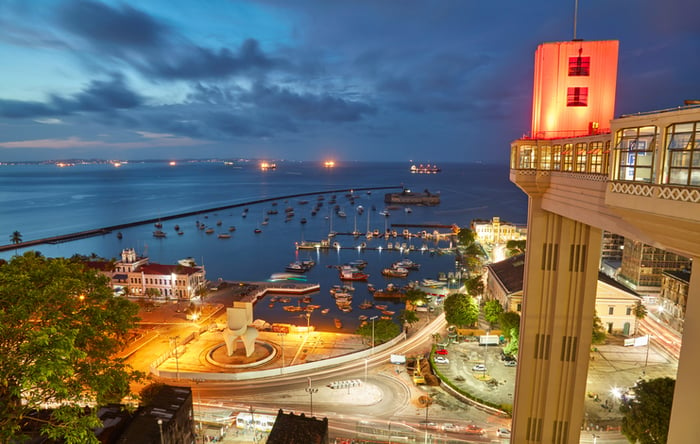 A lucrative business in a troubled economy

Kroton Educacional S.A. (OTC:KROTY) is a private educational group which operates primary, secondary, and post-secondary schools in all 26 states in Brazil. The company's campuses and distance learning centers serve over 1 million post-secondary students. Its academic framework, the Kroton Learning System (KLS), is used by 672 primary and secondary schools throughout Brazil.

It turns out that in an economy teetering on crisis, private education can be a lucrative business. With a keen understanding of this fact, Kroton's management launched an employment platform in 2014, which helps students improve their employability through profile-building and skills enhancement.

Called Conecta Channel, the service also contains an employer portal, and serves as a matchmaker between the two parties. Conecta is fast emerging as one of Brazil's largest employment platforms. Kroton claims that one out of every three students on Conecta ultimately finds employment.

As students of all ages seek to obtain degrees and sharpen employability in a weak environment, Kroton's fortunes are rising. In the company's most recently reported quarter, revenue grew nearly 8%, and comparable profit (after adjusting for a gain from the sale of a subsidiary in 2016) climbed approximately 5%.

Kroton's dividend currently yields 2.4%, and its payout ratio of 30% exhibits a decent margin of safety. Best of all, Kroton is attractively valued, with a price to earnings (P/E) ratio currently hovering around 11.5%.

Hypermarcas S.A. (OTC:HYPMY) is one of Brazil's leading pharmaceutical companies, holding the No. 1 position in over-the-counter (OTC) drugs, and the No. 2 position in branded generic drugs. The company owns many widely recognized brands in the Brazilian market, such as Benegrip, Doril, and Histamin.

Founded in 2001, Hypermarcas originally participated in several industries before it undertook a series of divestitures of food, home care, and personal care products over the last few years to focus solely on pharmaceuticals.

The divestitures are paying off. By narrowing its business to three segments -- branded prescription, consumer health, and branded generics -- Hypermarcas is enjoying vibrant growth. In the first half of 2017, net revenue is up 9%, and net income has increased 67% over the prior year.

Hypermarcas' success through a leaner business model has caught the notice of international competitors. Earlier this year, reports surfaced that both Johnson & Johnson and Japanese giant Takeda Pharmaceutical Co. Ltd. were interested in acquiring a controlling stake in Hypermarcas. While no offers have materialized to date, at a market capitalization of $6 billion, Hypermarcas is a relatively small player in the global pharmaceutical market, making it an attractive takeover target.

Hypermarcas' dividend presently yields 4.4%. This distribution to shareholders may seem hefty, but it's easily supported. The company's payout ratio of 58% indicates that a bit of space exists for the dividend to increase further.

At the end of last year, Itau Unibanco Holding (NYSE:ITUB) edged out fellow banking conglomerate Banco do Brasil as the largest bank in Brazil by assets, and also claimed the title of being the largest bank in Latin America, with total assets of $438 billion.

Itau was formed by the 2008 merger of banking giants Banco Itau and Unibanco, and since then it's continued to grow through an aggressive acquisition strategy. Most recently, the bank purchased Citigroup's Brazilian retail banking and insurance assets in late 2016.

But despite a tendency toward "tuck-in" acquisitions throughout Latin America, the bank is sound: Its most recent stress testing revealed a more-than-adequate capital cushion under the Internal Capital Adequacy Assessment Process, or ICAAP, an international risk assessment framework.

Itau cuts a regular monthly dividend check that yields just 0.45% annually. But this obscures the company's generous shareholder returns. In each of the last four years, Itau has paid out a "share bonus," essentially a stock dividend, equal to one share of Itau for each 10 shares an investor owns.

In other words, the bank has doled out a 10% stock dividend for four consecutive years, so while shares have been relatively flat over this time, investors have witnessed 46% of total return between stock and regular cash dividend payments.

To sum up, Itau may be one of the world's largest banks, but it doesn't take investor interest for granted, and employs a variety of shareholder-return methods to ensure that investors stick around in turbulent times.