Is General Leia Organa this year's Pikachu? In the lead-up to the December release of Star Wars: The Last Jedi, Walt Disney (NYSE:DIS) plans to unleash a torrent of marketing and sales on a galactic scale by deploying an augmented reality (AR) event so massive it could rival the Pokemon Go craze of last summer.

Disney will be reprising its "Force Friday" event from two years ago when Star Wars: The Force Awakens was released, but this time it will borrow a bit of magic from Pokemon Go. Like the treasure hunt for those animated characters, Disney has developed a special Star Wars app that contains a "Find the Force" feature. Users can then visit any of the 20,000 participating stores, and using the app can scan special Find the Force graphics that will reveal the AR character in the room with you. 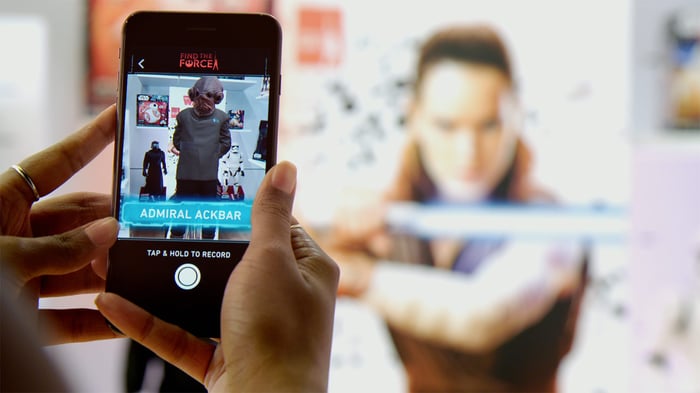 You can then take photos, record videos, and otherwise share the experience on social media. There are a total of 15 characters that can be revealed across the three-day event from Sept. 1-3, and digital rewards will be unlocked as you collect more characters. But instead of Charizard, Gyarados, or a Snorlax, you'll likely collect Rey, Poe Dameron, Finn, and Kylo Ren. Anyone who posts their character interactions on Twitter or Instagram by Sept. 3 is entered in a sweepstakes with the grand prize being a trip to the Last Jedi world premiere and a tour of Lucasfilm.

Ahead of the official launch, Disney is also using certain iconic landmarks -- Central Park in New York, the Eiffel Tower, the Golden Gate Bridge, the Sydney Harbour Bridge -- to reveal special AR scenes. Pointing the app at the sky near these landmarks will reportedly reveal Tie fighters and star destroyers.

The effort by Disney is truly massive in its global scale. Hundreds of retailers in more than 30 countries are participating in the promotion and will have the Find the Force logo. While the game is free of charge for players, retailers are obviously hoping there will be a huge influx of customers in their stores who will end up purchasing gear. Retailers including Wal-Mart, LEGO, Toys R Us, J.C. Penney, and Kohl's are all participating and hoping some of that Disney magic rubs off on them.

With good reason: Retail is suffering from a slowdown in customer traffic and this Star Wars promotion has the potential to drum up foot traffic. Stores such as Target, Toys R Us, and Wal-Mart will be opening their doors at midnight ahead of the event just like they do for Black Friday sales, and will have on hand exclusive and limited-edition toys. 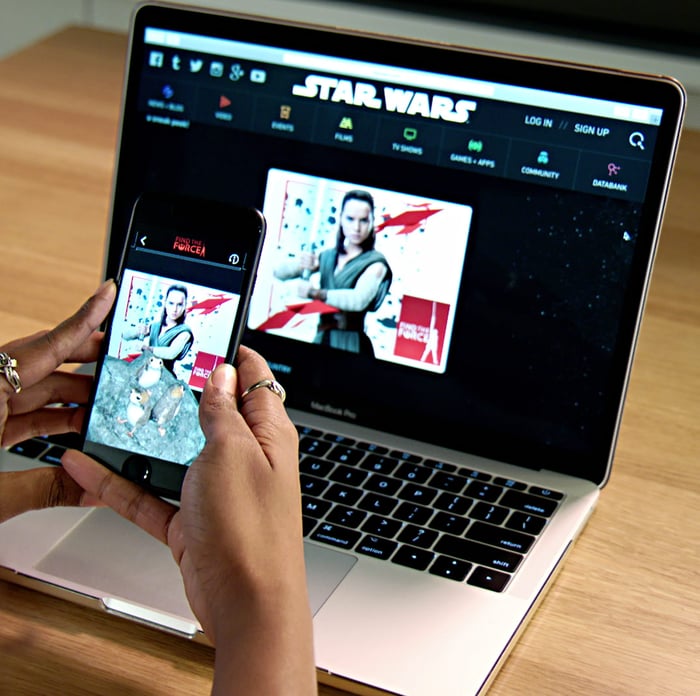 Earlier this year, my Foolish colleague Danny Vena noted that it's been estimated that the first Force Friday event saw consumers spend $760 million on Star Wars toys in 2016, and that $1 out of every $11 spent over the three-day event was on Star Wars gear. For the month of September alone, Force Friday reportedly sparked a sevenfold increase in online sales of Star Wars toys.

The force of toy sales

There were an estimated $26 billion in U.S. toy sales in 2016 and the market researchers at NPD Group say toy sales were up another 3% over the first six months of the current year. While that's slower than the previous two years, NPD Group expects the September movie kickoff to catapult toy sales forward, and says, "2017 may go down in history as the year of movie licensed toys."

Depending upon how successful this Disney promotion is (no one seems to think it won't succeed), we may very well see other franchises use similar AR technology to help drive sales. Certainly the retail industry will readily hop aboard, but there are only so many Star Wars or Pokemon Go sensations to capture the public's imagination -- and only Rey or Leia have the qualities to topple a Pikachu.