After year-to-date declines in the neighborhood of 40%, shares of Shoe Carnival Inc. (NASDAQ:SCVL), a leading retailer of moderately priced family footwear, are clawing their way back upward Thursday: The stock was up 22% as of 1 p.m. EDT after the company reported a better-than-expected second quarter.

Starting from the top line, Shoe Carnival's net sales increased a modest 1.4% to $235.1 million during Q2, which checked in above analysts' consensus estimate of $231.3 million. Comparable-store sales were slightly less impressive with a 0.4% increase; however given the number of brick-and-mortar retailers experiencing declining comps, a small gain was good enough for investors. Shoe Carnival also reported that earnings per share jumped 9.1% in the quarter to $0.24, which was better than analysts' estimates calling for $0.20 per share. 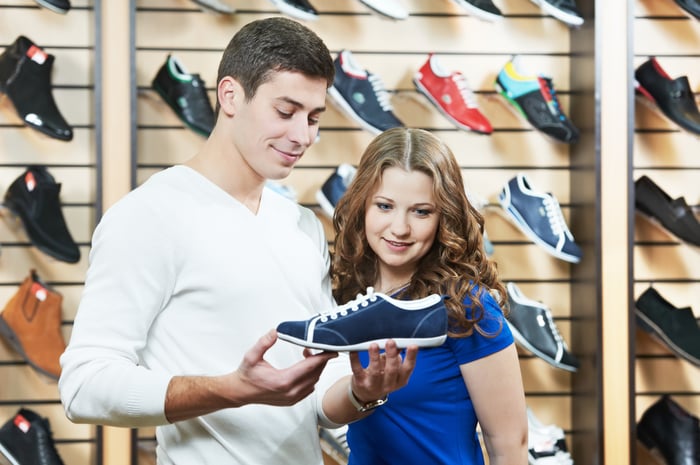 "We are pleased with the quarterly improvement in our sales trend, particularly given this year's later back-to-school dates in certain markets, which shifted sales from July into August. Our quarterly earnings were driven by the increase in sales along with our ability to efficiently manage our expenses," said President and CEO Cliff Sifford in a press release.

The company's 23% jump in stock price Thursday appeared to be driven by investor optimism that business is at least improving, even if the gains in net sales and comparable store sales for the second-quarter weren't blockbuster. However, management did note that its multichannel initiatives have generated an August comparable-store sales increase of 7%, which bodes well for the back-to-school shopping period. Management also recently announced a 7% increase to its quarterly cash dividend, which suggests additional confidence about the future.