It's been a surprisingly strong year for hotels.

Both Marriott International (NASDAQ:MAR) and Hilton Worldwide Holdings (NYSE:HLT) have outperformed the S&P 500 by significant margins; Marriott shares have gained 30%. Meanwhile, online travel agencies continue to thrive. Both Priceline Group (NASDAQ:BKNG) and Expedia (NASDAQ:EXPE) have both climbed more than 25%.

Despite those promising performances, there's a threat rising unlike any the industry has ever faced before as Airbnb upends the primacy of hotels. 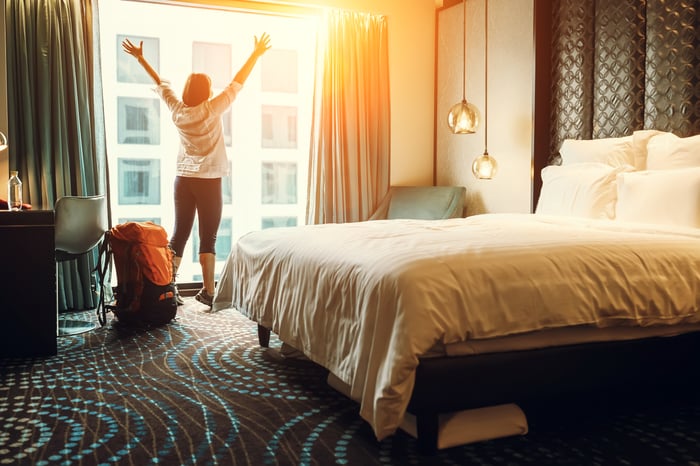 The home-sharing start-up that was founded in 2008 is now worth $31 billion, based on a funding round earlier this year. That puts it ahead of Hilton, InterContinental Hotels (NYSE:IHG), Hyatt Hotels (NYSE:H) -- but behind Marriott -- following its acquisition of Starwood Hotels last year. Airbnb now has more rooms available than the five biggest hotel brands combined.

And Airbnb's barnstorming is far from over. Revenue jumped more than 80% last year, and the company turned profitable in the second half of 2016 and expects to turn a profit again this year. The travel site is expanding into ancillary businesses like experiences, allowing "hosts" to offer tours or other kinds of activities designed for tourists, and is planning to allow flight bookings on its platform.

Airbnb has drawn plenty of comparisons to its Uber. Both are approximately the same age and have become "unicorns" because of their disruptive, on-demand, user-based models that were enabled by smartphones. The two companies have also run into trouble with regulators on more than a few occasions as they have expanded around the world with little regard for local laws.

However, Uber has been the greater disruptor in its industry, as ride-hailing apps like Uber, Lyft, and others are becoming a de facto replacement for cabs. In New York, taxi ridership has fallen 30% over the last three years, and the price of a medallion, which is necessary to operate a cab, has fallen by more than half.

That trend is likely to continue as most riders find apps like Uber to be more convenient than hailing a cab on the street. However, hotel industry revenue continues to grow even as Airbnb takes a bigger share of the market. Unlike the taxi industry with Uber, Airbnb offers a somewhat different experience than a hotel. It generally attracts a lower-maintenance customer who doesn't need customer service or the reliable comforts of a hotel room. Airbnb has also opened up in areas that hotels hadn't traditionally served like lower-income neighborhoods and small towns. And of course Airbnb rooms don't offer amenities like conference halls that hotels do.

Still, there is considerable overlap between Airbnb and traditional hotels, especially in big cities where regulatory battles have been heated. The industry's lobbying arm, the American Hotel & Lodging Association, which is funded by hotel chains like Marriott and Hilton, often promotes such regulations, and considers combating Airbnb through legislation one of its objectives.

There is evidence that Airbnb is bringing room rates down, especially during busy periods like conventions and holidays, and also that occupancy rates are falling because of it, according to a Morgan Stanley study.

Where this is going

As Airbnb moves further into the mainstream, problems for the hotel industry are likely to exacerbate. Morgan Stanley found the home-sharing start-up poses more of a threat to the hotel industry than to online travel agencies. In fact, OTAs are already embracing the trend. Expedia acquired home-sharing site HomeAway, which also owns VRBO, for $3.9 billion in 2015, and Priceline has begun adding its own home and apartment rentals.

Beyond fighting on the regulatory front, hotels are beginning to adopt some of the features that have made Airbnb popular. Some hotels are seeking to make rooms more individualized, and adding kitchens or at least making them available. Others have acquired vacation rental chains or launched their own.

Tackling the competitive threat directly is a better approach for these hotels rather than fighting Airbnb with red tape. Like other innovations, Airbnb is thriving for a reason. It's eliminating inefficiencies in the market by making rooms in people's homes available, and providing an experience people want at a fair price.

The company has moved into the business travel market and is fast becoming mainstream as it embraces a wholesale travel model. Hotels would do well to absorb some of the lessons from its business as they adapt to a changing market. If not, occupancy and room rates will continue to fall, and their stock prices will eventually follow suit.