Apple's (NASDAQ:AAPL) new iPhone models -- the 8, 8 Plus, and X -- are dominating tech headlines. However, a recent report from Newzoo, which tracked global smartphone usage through the end of July, revealed that of the 730 million active iPhones worldwide, the iPhone 6 and 6s were the most popular devices. 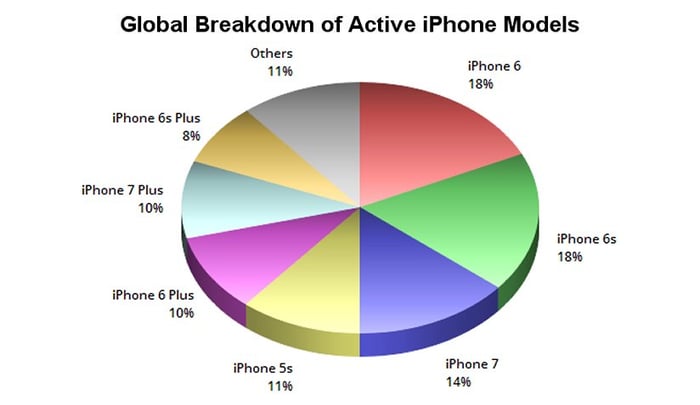 Newzoo's prior report, which tracked device usage through April, found that the iPhone 6 and 6s respectively controlled 21% and 18% of the market. The iPhone 7 and 7 Plus moderately grew their market shares since then, from 11% and 8%, respectively.

The iPhone 6 and 6s remain popular for a few reasons. They were the last models with headphone jacks, and their chassis designs and larger screens represented a big leap forward from the iPhone 5s -- unlike the incremental improvements in the iPhone 7 and 8.

Meanwhile, customers who were eyeing the iPhone but waiting for lower prices -- particularly in overseas markets -- bought the older models. These trends could be troubling for Apple, since analysts focus on the company growing its iPhone shipments every year.