Shares of QEP Resources (NYSE:QEP) slumped on Tuesday and were down nearly 10% by 2:30 p.m. EDT. Driving the decline was the company's updated outlook for production, which it reduced after completing an asset sale and factoring in some pilot wells that missed the mark.

QEP Resources initially expected that it would produce between 57.2 million to 60.3 million barrels of oil equivalent (BOE) this year. However, the company recently closed the sale of its Pinedale assets in Wyoming, which will result in a lower contribution from those properties this year. That said, in addition to that lost output, the company also noted that a group of pilot wells completed in deeper parts of the Three Forks Formation had underperformed expectations. As a result, the company has modified its development plans going forward. Furthermore, the driller noted that it experienced some delays in the Permian Basin as a result of the continued evolution of its development methodology. As a result, QEP Resources now expects full-year output to be between 52.3 million to 54.1 million BOE. 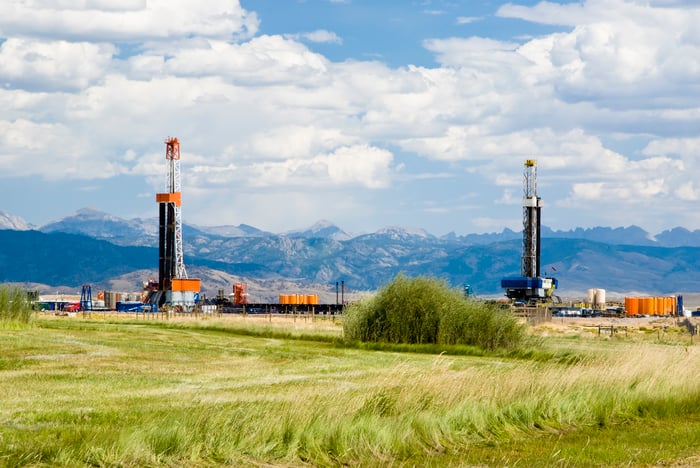 QEP Resources is one of a small handful of shale drillers to announce failed drilling experiments this year that will cut into its expected output. In the Eagle Ford shale, for example, Sanchez Energy (NYSE: SN) noted that it brought several wells on line last quarter that used a larger completion design. However, these wells underperformed expectations. As a result, Sanchez returned to its standard well completion design for the remaining wells of its 2017 development plan. Because of that misstep, as well as the impact from lower oil prices, Sanchez Energy cut its full-year production guidance.

Shale drillers continue to test new ideas in hopes of finding the next breakthrough to drive down costs and increase production. Unfortunately for QEP, some of its trials haven't worked, which will cause it to fall short this year. Consequently, the company has fallen further behind rivals that have unveiled step changes in their drilling process this year. This growing gulf could cause it to continue to underperform until it finds the right formula to unlock more of the oil and gas resources it controls.