Quadro is the name for NVIDIA's (NASDAQ:NVDA) graphics processing units (GPUs) that cater to professionals who do various levels of design work across many fields, including transportation, engineering, and even video game development. Professional-grade GPUs are particularly useful for graphically demanding computing applications, such as virtual reality, 3D modeling, and photorealistic rendering (not to mention designing cool spaceships for Guardians of the Galaxy).

However, NVIDIA is facing heightened competition from its archrival, Advanced Micro Devices (NASDAQ:AMD), which has attempted to regain lost market share this year by introducing its new high-powered Vega GPUs. 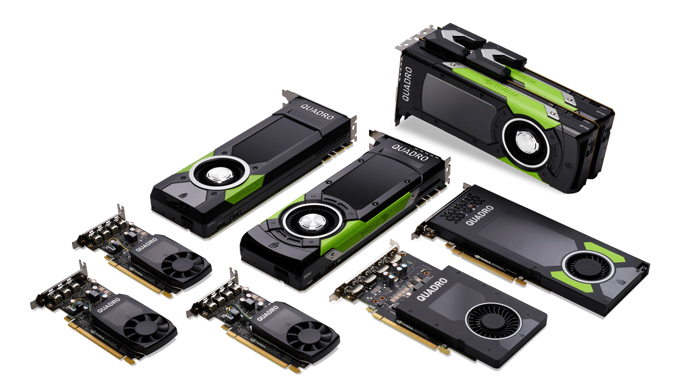 After a decline from fiscal 2015 through 2016, Quadro revenue suddenly saw a spurt last year of 11%, which has continued into the current fiscal year. On the last conference call, NVIDIA CEO Jensen Huang said, "The growth opportunity for Quadro are several, and it's starting to kick in."

Huang outlined a few areas of opportunity that can keep Quadro revenue growing. NVIDIA recently announced Optix 5.0, where artificial intelligence will vastly improve the productivity of artists and designers in rendering and visualizing images.

Also, NVIDIA is making its Quadro GPUs available for thin notebooks by way of an external chassis that will house a Quadro or Titan GPU, which can be connected to a notebook computer through a Thunderbolt cable. It's called the external GPU system, or eGPU. This will allow professionals with thin notebooks that have slower GPUs to access the power of NVIDIA's more powerful professional-grade unit that cannot fit inside a small notebook form factor.

Finally, there's the opportunity in virtual reality (VR). All of NVIDIA's top Quadro cards are "VR ready". SuperData expects the VR market to be worth $28.3 billion by 2020, representing a compound annual growth rate of about 100%. This serves as a nice tailwind for NVIDIA's Quadro cards, not to mention sales of its GeForce gaming cards, as well.

NVIDIA is not alone

Of course, NVIDIA is not the only provider of professional visualization solutions. Advanced Micro Devices introduced its new Vega class of GPUs earlier this year. Along with the new high-powered line of cards for gamers, AMD also released a Vega Frontier Edition GPU, which will go head-to-head with NVIDIA's Quadro GPUs. 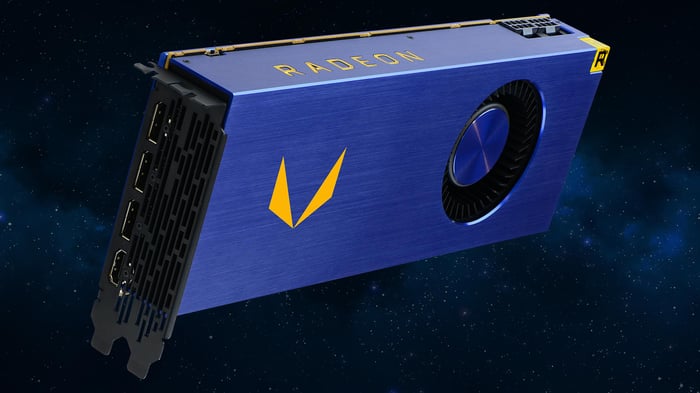 AMD conducted its own test to compare the performance of the Vega Frontier Edition against NVIDIA's Titan Xp. AMD claimed victory, reporting up to 172% faster rendering performance over Titan Xp. But it wasn't an apples-to-apples comparison, since the Frontier Edition is a card designed for professionals, while NVIDIA's Titan Xp is meant for consumers who play PC games. Professional graphics cards run on different driver software than gaming cards. So AMD's test didn't provide the best comparison.

The ideal comparison is with NVIDIA's Quadro GPUs, such as the GP100, P6000, and P5000 models. On paper, AMD's Frontier Edition smokes NVIDIA's Quadro P5000 and P6000 cards. Even compared to NVIDIA's latest GP100 card, Vega is still faster, with processing power of 13.1 teraflops (the number of floating point operations per second) compared to the GP100's 10.3 teraflops. (All you need to know is the higher the number, the better.)

Another plus for AMD is that the Frontier Edition is cheaper, priced at $1,500, which is much more affordable than the GP100, which sports a huge price tag of about $6,000. Even the older P5000 is much more expensive priced at over $2,000 and provides much less horsepower than the Vega Frontier.

However, one area where NVIDIA has showed better engineering skill is designing high-performing GPUs that require relatively less power than the competition, which has to be factored in when comparing competing GPU performance. While NVIDIA's GP100 is less powerful than the Vega Frontier, it only consumes 235 watts of power compared to Vega's 300 to 375 watts. So, Vega Frontier is faster, but AMD had to build it with more power consumption in order to beat NVIDIA. Right now, the main advantage AMD has is a better price. We'll see how that changes things in the next quarter.

The opportunity right now across virtual reality and other professional visualization applications is big enough to serve as a tailwind for both AMD and NVIDIA. However, AMD's new offering will shake things up a bit as we get ready for a new round of earnings releases. Professional visualization segment revenue was up about 10% for NVIDIA in the fiscal second quarter, but this was achieved without AMD's new Vega Frontier on the market. The addition of AMD's new professional cards will make things interesting when we get the next earnings update from both GPU providers in the fall.