The company isn't taking any chances.

Amazon.com's (AMZN -2.49%) Echo speaker debuted in late 2014 and has since taken the smart-home speaker market by storm. Research firm eMarketer says Amazon will take a whopping 70.6% of the voice-enabled speaker market this year, which is an amazing lead in the smart-home space that's likely to be bolstered by Amazon's release of the new Echo Plus and Echo Spot last week. The new devices bring the total amount of Echo devices (excluding the new Echo Buttons and Echo Connect) to seven, each with their own unique functionality.

The HomePod and Google Home have garnered lots of buzz, but both are also following in the smaller, cheaper, and early mover footsteps of the Echo -- and Amazon's growing list of devices are likely to keep Apple and Google at bay. 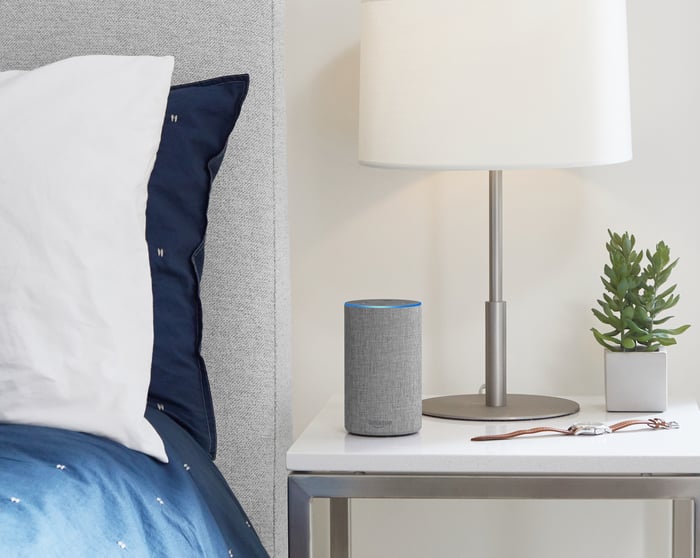 Amazon has had more than two years to build up its advantage in the voice assistant smart speaker space and it's not ready to cede that advantage to Apple or Google. But the company doesn't appear to be satisfied with only dominating the voice-enabled speaker market.

Here's a list of all of Amazon's Echo devices, including the recently released new ones:

I'm purposely leaving out the new Echo Connect (a small device that allows users to make phone calls) and the Echo Buttons (which sync to the Echo and allow you to play games) since they're not stand-alone devices.

What's clear from this list though is that Amazon now has a plethora of Echo devices that come in all shapes, sizes, and prices, while its top competitors have just one device each. Amazon is essentially giving potential customers so many options to choose from that it makes the HomePod and Google Home already seem limited.

How all of this helps Amazon and hurts Apple and Google

The fact is that Amazon beat Apple and Google into the voice-actived speaker market and now it's flooding the connected-home space with nearly every type of Echo device it can think of.

This is a smart move by Amazon for two reasons. The first is that Amazon doesn't have to worry about just one device becoming a success. If the Echo Tap, or Echo Show, etc. doesn't do well with consumers, then it has tons of other devices that likely will. Meanwhile, Apple and Google are essentially betting on just one device each (for now).

Additionally, many of Amazon's devices are cheaper than Apple and Google's. The cheapest Echo costs just $50, compared to the HomePod's hefty $350 price tag and Google Home's $130. Loyal Apple fans may clamor for the HomePod, but the average consumer isn't likely to shell out that kind of money for the device. Google Home is much cheaper and packs arguably the best virtual assistant out of all of thee companies. But budget-conscious consumers will notice that Amazon has four of its own devices that cost the same or less than Google Home.

Amazon's Echo strategy has paid off quite well so far. Echo owners owners spend about 10% more on Amazon, and shop more frequently on the platform, than they did before they owned an Echo device. And that could eventually translate into a significant revenue jump for Amazon. RBC Capital Markets released an investor note earlier this year estimating that Alexa-powered devices could earn Amazon $10 billion in revenue by 2020, through device sales and sales of items on Amazon's marketplace.

Amazon investors should read these numbers and smile. The company has proved that it can increase sales by getting its new devices into customers' homes and it just doubled down on that strategy. Amazon is the clear leader for voice-enabled home devices, which is a new market with huge potential, and its current lead and broad pricing strategy will likely keep it ahead of Google and Apple.