One day after electric-car maker Tesla (TSLA 1.36%) said production bottlenecks were suppressing the first Model 3 deliveries, General Motors (GM 1.57%) announced that deliveries of its similarly priced Bolt EV are beginning to climb to more meaningful levels. While Tesla believes its Model 3 production and deliveries will surge far higher than GM's Bolt production and deliveries in the coming quarters, GM remains the only automaker selling a reasonably priced all-electric vehicle with more than 200 miles of range in worthwhile volumes. 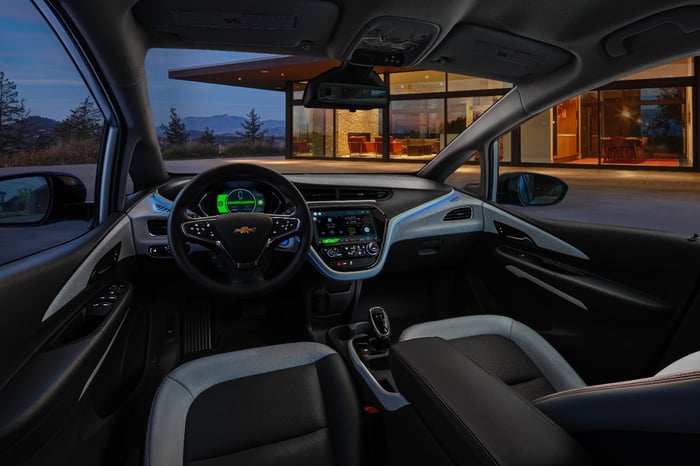 "Bolt EV had its best month ever with 2,505 retail deliveries and 2,632 total deliveries," GM said on Tuesday. 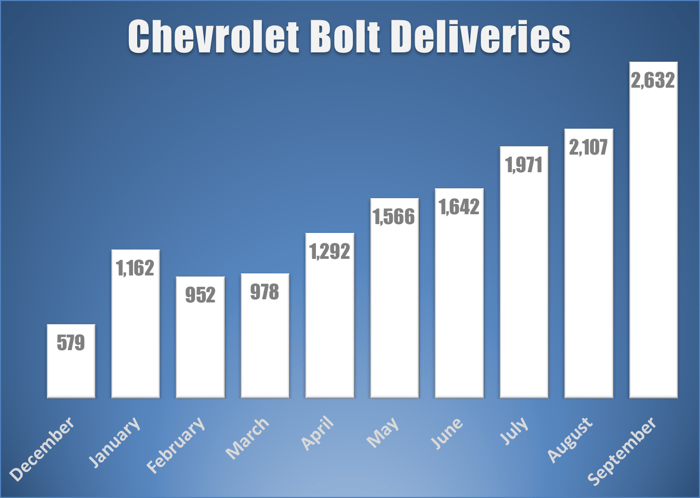 In addition, it was the best month ever for total Chevrolet plug-in vehicles. Combined Bolt EV and Volt retail deliveries were 3,929 units.

September's 2,632 Bolt deliveries are a testament to GM's success with its first fully electric vehicle. It marked the fifth month in a row that GM reported record Bolt EV deliveries. Further, the 25% sequential growth in September's Bolt EV deliveries was the highest monthly growth the important vehicle has seen since April.

Bolt deliveries benefited from the vehicle's recent national rollout. August was the first month the Bolt was available nationwide.

Record-high monthly deliveries for GM's Bolt EV notably came one day after the automaker announced plans to introduce two new all-electric vehicles within the next 18 months, and a total of at least 20 all-electric vehicles by 2023. "General Motors believes in an all-electric future," GM said in its press release about the major plans for EVs on Monday.

The Bolt was launched late last year. With its impressive 238 miles of range and reasonable $37,500 price tag, it represents the foundation for GM's ambitious EV plans. Indeed, the two all-electric vehicles GM is bringing to market within the next 18 months are "based off learnings from the Chevrolet Bolt EV," the company said.

Meanwhile, all-electric automaker Tesla has seen production and deliveries of its Model 3 get off to a worse-than-expected start. During its third quarter, Tesla said it delivered just 220 Model 3 units. And it produced just 260 units -- far below its target production of 1,500 Model 3 units, which Tesla said it was "confident" it would be able to achieve. Tesla's unimpressive start with Model 3 production is concerning. As an automaker that has never delivered more than 100,000 vehicles in any trailing-12-month period, a slower-than-expected start to Model 3 production could indicate Tesla has underestimated the difficulty in achieving its ambitious Model 3 production targets. Meanwhile, GM's rising Bolt deliveries highlight an experienced automaker's ability to steadily increase production of the important vehicle.

The high-volume production in the hundreds of thousands of units that Tesla wants to achieve next year represents completely unchartered territory for the company. Even if GM's production targets for its electric vehicles aren't as ambitious as Tesla's, investors should look for more evidence of Tesla's ability to become a high-volume automaker, particularly as GM's Bolt EV deliveries climb, and as major automakers begin committing to significant electric-vehicle plans.