Shares of student-loan lender Navient (NASDAQ:NAVI) are down by about 11% as of 11:30 a.m. EDT Thursday after the company announced that it entered a definitive agreement to acquire Earnest, an online direct-to-consumer student-loan refinancing company.

Separately, the state of Pennsylvania filed a lawsuit against Navient and a subsidiary on Thursday, alleging that their "deceptive practices and predatory conduct harmed student borrowers and put their own profits ahead of the interests of millions of families."

Navient agreed to pay $155 million in cash for Earnest, funded by Navient's excess cash on its balance sheet. In a presentation, the company said the transaction would not affect Navient's ability to maintain its annual dividend policy, but that the company will suspend its remaining share-buyback program, which had $160 million of unused capacity as of Sept. 30, 2017. 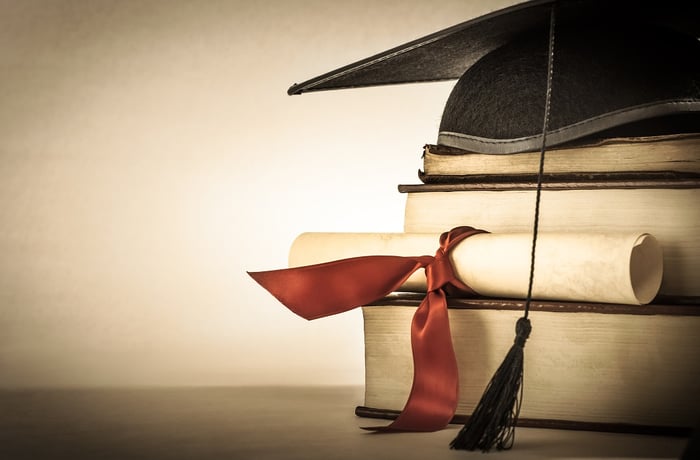 Navient believes that the deal will be dilutive to near-term earnings, suggesting that GAAP earnings per share for 2018 will decline by $0.08 to $0.10 as a result of the transaction. By the second half of 2019, the company expects the Earnest acquisition to contribute positively to its earnings power as it adds refinanced student loans to Navient's combined balance sheet.

Earnest spends heavily on marketing, which is expensed immediately, while the loans it originates generate interest income for years thereafter. As a result, growing originations results in losses today, but offers the potential of profits from the spread between a loan's funding costs and yields over the life of the loan.

As for Pennsylvania's lawsuit against the company, the Attorney General's Office accused Navient of "making predatory loans to students attending for-profit or non-profit colleges with graduation rates lower than 50 percent."

It also accuses Navient of "unfair and deceptive acts by steering student borrowers into short-term loan forbearances that instead continued for the long term -- accruing interest and adding to the loans' principal that students were required to repay."

Pennsylvania residents filed 1,059 complaints against Navient with the Consumer Financial Protection Bureau. The state's Office of the Attorney General is seeking the court to order full restitution for borrowers, disgorgement by Navient of unlawfully gained profits, and civil penalties to be determined later, among other goals.

The ultimate outcome of the suit is anyone's guess. The U.S. Consumer Financial Protection Bureau, and the states of Illinois and Washington sued the company in January, thus this new suit only adds to existing litigation and settlement risk. For its part, Wall Street seems content to sell now and ask questions later.