Please ensure Javascript is enabled for purposes of website accessibility
Log In Help Join The Motley Fool
Free Article Join Over 1 Million Premium Members And Get More In-Depth Stock Guidance and Research
By Daniel B. Kline - Oct 10, 2017 at 10:07AM

The company has improved its bottom line in a challenging operating environment.

In a challenging market for retailers, Tailored Brands (TLRD) had a strong second quarter with earnings that were more than double where they came in for the year-ago period. The company, which owns Men's Warehouse, Jos, A Bank, K&G, and other clothing chains, also retired $42.6 million in debt, taking its total to $50 million in debt paid off year-to-date.

Tailored Brands reported second-quarter earnings per share (EPS) of $1.19, up from $0.51 in Q2 2016. The company gained $0.05 per share due to having lower debt payments. The company posted those gains by managing expenses given that it posted only a slight 0.1% comparable-store sales increase across all its brands.

"We were pleased that all brands posted sequential improvement in comparable sales on a one- and two-year stacked basis during the second quarter, which resulted in positive comparable sales for our retail segment as a whole," said CEO Doug Ewert in the Q2 earnings release. "That said, the retail environment remains challenging and therefore we have a cautious outlook for the second half of the year." 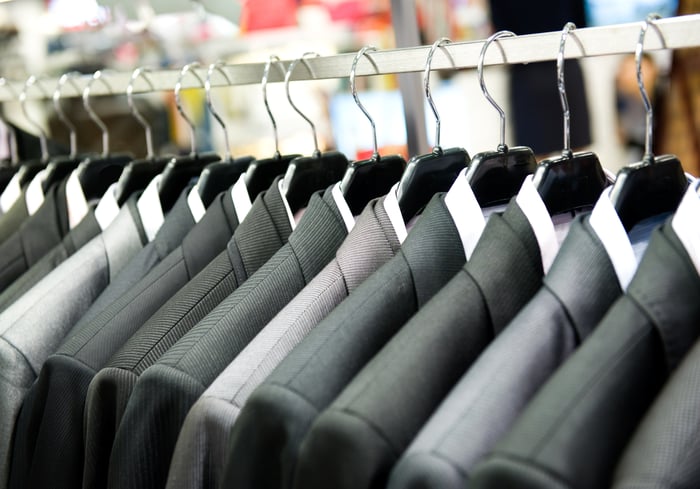 After closing August at $11.82 shares finished September at $14.44, a 22% increase according to data provided by S&P Global Market Intelligence. Basically, investors are rewarding the company for its careful fiscal management and the fact that it managed to keep same-store sales relatively flat.

It's worth noting that total net sales fell by 6.5% to $850.8 million. The company blamed that largely on store closures, and unlike other retailers where shutting down underperforming locations did not solve the problem, it appears to have stopped the bleeding here.

The company has raised the low-end of its full-year earnings range $1.42 per share, up from $1.37. It did also lower the top of its range from $1.67 to $1.62. That's a modest change, but the fact that the company has found a steadily profitable operating model is encouraging at a time when many retailers are fighting to survive.