I haven't exactly been a bull when it comes to Keryx Biopharmaceuticals (NASDAQ:KERX). For starters, it's not even a biotech company (trying for the old "bait-and-switch" move, eh?). It doesn't own a drug pipeline. Worst of all, stubbornly slow sales of its only drug, Auryxia, have provided all the warning I need to stay away from the stock.

But things may be about to change.

No, I'm still not interested in adding it to my portfolio, but Auryxia is showing signs of life. Management thinks it can even bring in a nice bounty in 2017, and an upcoming decision from the U.S. Food and Drug Administration -- likely the reason for a bump in the share price recently -- could greatly expand its potential market.

These two reasons underpin why I think the bears are wrong about Keryx (ahem) Biopharmaceuticals stock. And considering that 24% of outstanding shares are being sold short, there are a lot of bears. 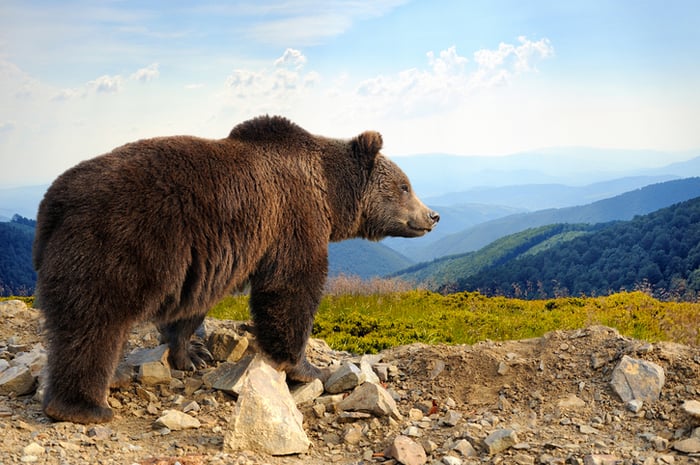 First things first: Investors should focus on the current market for the company's only drug. Sales of Auryxia, approved as a treatment for controlling phosphorus levels in the blood of patients with end-stage renal disease, have picked up in recent quarters. It's still far from its originally projected $1 billion in peak sales, but management expects product sales to settle in the range of $62 million to $66 million in 2017. To put that range into perspective, Keryx Biopharmaceuticals had just $32 million in total revenue last year.

If prescriptions continue to rise and Auryxia delivers on management's promise, then investors may finally be able to regain their former optimism going forward. The stock has been walking on eggshells since manufacturing woes delayed an already slow launch in 2016, only now climbing back to highs set last year. Continued prescription growth could have investors enjoying share gains into 2018. 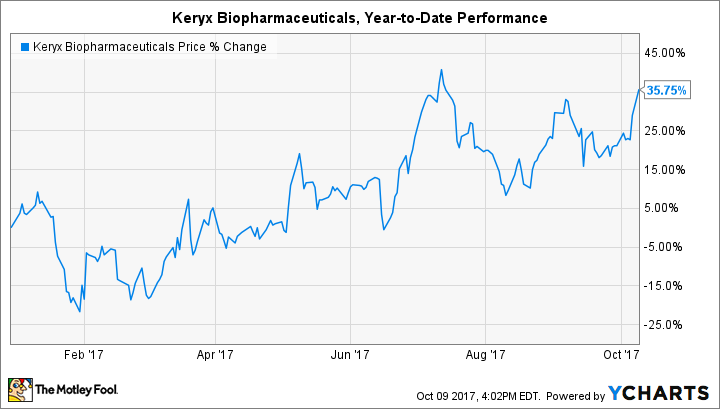 Of course, investors eagerly await an update in the next month that will affect the potential trajectory of Auryxia sales in the long term, and therefore Keryx Biopharmaceuticals stock. That's because the FDA will announce a decision on the supplemental New Drug Application, or sNDA, filed way back in March. The company wants the green light to begin prescribing its current one-trick-pony Auryxia to treat iron deficiency anemia in patients with non-dialysis dependent chronic kidney disease.

That's a mouthful, but expanding the drug's use in that way would significantly increase the patient population available. An estimated 650,000 individuals are currently treated for iron deficiency anemia in the United States. Compare that to the 21,100 prescriptions written for Auryxia in the second quarter of 2017, and it's easy to see what the bulls are thinking.

The sNDA is supported by a favorable phase 3 trial evaluating 234 patients that demonstrated clinically meaningful results, but investors have to wait until at least Nov. 6 (the decision date) to know if they'll receive an early Christmas present.

Here's the thing: The large amount of short-sellers flocking to Keryx Biopharmaceuticals stock appear to be making a bet on a one-time, binary event -- namely,  the FDA decision. That will certainly affect the share price one way or the other (as all binary events do), but the phase 3 data don't appear to contain any surprises. The treatment demonstrated a significant result in "only" 52% of patients, although these were patients that didn't respond to other available treatments.

It's impossible to guarantee a successful outcome for the upcoming binary event, but I sure wouldn't want to be betting against this one right now.

Keryx Biopharmaceuticals has already been proving the naysayers wrong through increased sales of Auryxia, even if there is a long way to go. The stock would no doubt drop with a regulatory rejection, making short-sellers correct regarding their bets on a one-time binary event, but that wouldn't necessarily mean the company should be completely written off in the long term. Continued prescription growth in the current treatment indication could allow the company to earn its $1 billion valuation over time, even without additional approvals.