Ardelyx (ARDX 0.69%) stock rose 44% on Thursday after the company announced positive data from the phase 3 T3MPO-2 trial testing its irritable bowel syndrome drug, tenapanor, after the close of the bell last night.

Of the patients taking tenapanor, 36.5% were deemed responders, a statically significant increase over the 23.7% responder rate for patients taking placebo. Responders were defined as having at least a 30% reduction in abdominal pain and an increase of one or more complete spontaneous bowel movements in the same week for at least six of the 12 weeks of the treatment period. 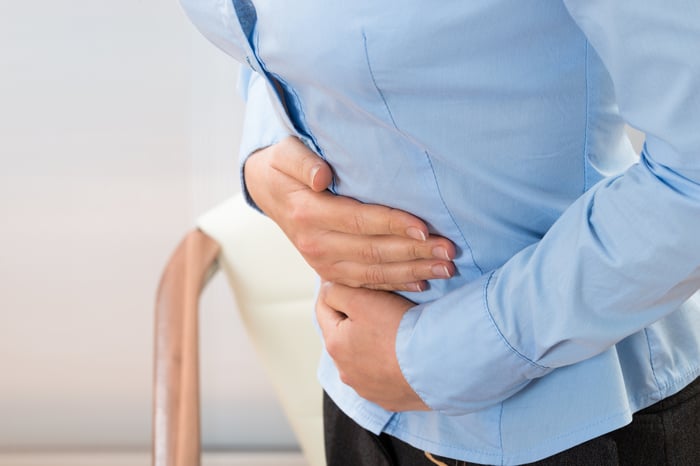 The responder rate was the primary endpoint of the study, so you could stop there and call it a success, but parsing the data further reveals more good news for Ardelyx. Looking at pain and bowel movements separately, tenapanor was better than placebo for both measurements individually. In Ardelyx's first phase 3 trial for tenapanor, the drug met the combined responder rate primary endpoint and improved abdominal pain individually, but didn't show a statistically significant increase in bowel movements alone. The better performance for the second trial probably explains some of today's jump in stock price.

Using the more stringent requirements of responding for nine out of the 12 treatment weeks, tenapanor also had a higher responder rate of 18.4%, compared to 5.3% for placebo. Tenapanor improved pain and bowel movements when looked at separately with the more stringent measurement of nine out of 12 weeks as well.

With a second positive phase 3 trial for tenapanor, Ardelyx is on track to submit a marketing application to the Food and Drug Administration in the second half of 2018.

While the efficacy data looks good enough to get past the FDA, the drug does create a high level of diarrhea: 16% compared to 3.7% for patients taking placebo. Diarrhea isn't the worst side effect -- especially relative to having pain because the patient can't have a bowel movement -- but it may make a difference after tenapanor is approved and has to compete with other irritable bowel syndrome drugs.

The placebo adjusted discontinuation rate due to diarrhea was 5.8% in this trial, while, for example, 5% of patients taking Ironwood Pharmaceuticals and Allergan's Linzess in its pivotal trials discontinued due to diarrhea. We'll have to wait and see whether a percentage point or so increase in severe diarrhea is enough to make a difference to prescribers.